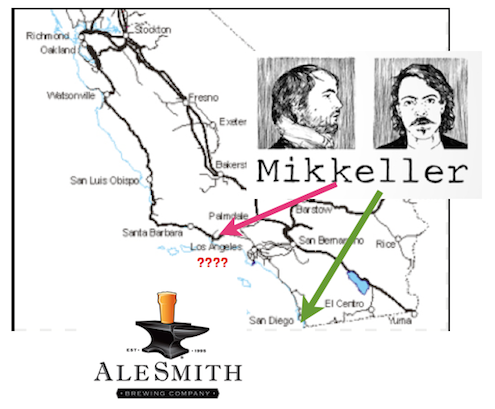 The news that Mikkel Borg Bjergsø and Peter Zien are expecting to be brewing Mikkeller Beers in the almost old AleSmith facility by June was presaged by their collaboration on Beer Geek Speedway earlier this year.

But buried in the press release was this small sentence, “Bjergsø also foresees opening other locations throughout California.” Seeing as how there is already a Mikkeller bar in San Francisco and that the new AleSmith/Mikkeller tasting room is underway, that leaves where? The biggest city left would be us! L.A.

No offense to cities from Sacramento to Santa Barbara but it seems like the next logical choice. Of course it may have to wait for his Denmark brewpub and other enterprises to come to fruition but if I could get a bar as unpretentious and still artsty with a killer beer list like Mikkeller SF, I would be all in.

The other cool news is “the plan on having many brewers from around the world come through and collaborate, …. to set up a ‘collaboration of the month.’” That alone would be a big draw for beer geeks to head to Miramar.