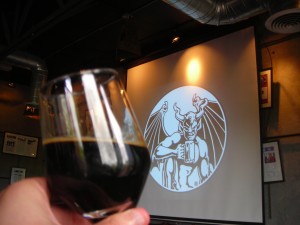 The Stone Brewing that you know now will be so much bigger and cooler in 2013 than 2011. As you may have seen in the Twitter-sphere and on Facebook, Stone is expanding and in typical Stone fashion, boldly.

I was among the lucky people that got to experience the news in one day straight from the source, Greg Koch and Steve Wagner. We traveled from the Stone World Bistro in Escondido, to Liberty Station near the San Diego airport to a lovely little farm in North San Diego county. And it was jam packed with news. So here goes…..

1. A new Stone store will be opening in the South Park area of San Diego. Similar to the store at the World Bistro. You can get a growler fill, buy a bottle and get a shirt. It will be tremendous for those in San Diego who now don’t have to trek north to get their beer.

2. A new World Bistro will open at Liberty Station. In the old Navy mess hall! And you can play bocce! (OK, I have never played bocce, so I don’t know why I put the exclamation point there) And their will be a brewery on site that might make some interesting one-off beers.

3. And they bought a farm! Yes, a real working farm that supplies part of the food for the restaurant. It may end up hosting educational events that reinforces the Stone locavore ethos and might be the site for beer dinners. It already has an outdoor oven and a great little lake. Combine that with the great San Diego weather and you have a winner.

4. The headquarters is expanding and not by a little. This will be HUGE! A new production facility about the size of what they currently have right next door. An expanded kitchen, more parking, electric vehicle charging spots near the front door. Then across the parkway will be a 50 seat boutique hotel, a barrel aged and sour beer facility and another garden.

5. There will be a lottery for the Barrel aged Macadamia collaboration porter in the new fancy caged and corked bottles because they will not hit the regular distribution chain. Why? There are only 672 of them.

6. Today is the brew day for the charity Green Tea IPA collaboration. A big 9% beer with loads of tea and literally a world of hops in it.

7. The Belgo Anise Imperial Stout is excellent. Big anise and coffee aromas. Not heavy and viscous at all. It is lively and fun to drink. Unless you do not like black licorice. It will be available along with the regular Imperial Stout in a couple of weeks.

Oh and there is something about a brewery in Europe too.

In a couple days, I will talk about what I believe the future holds for these Stone ventures.