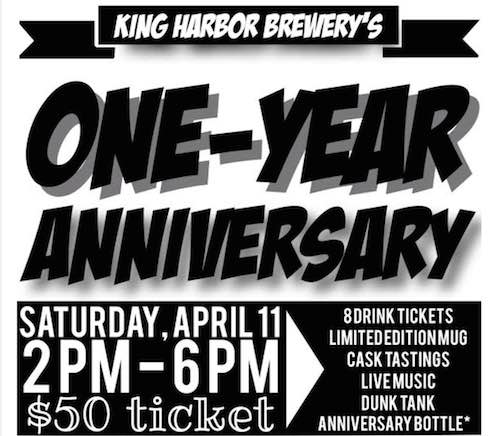 April 11 marks the one year anniversary celebration of King Harbor. And the plans are so big for the Saturday event that the party will spill outside of the brewery.
Here are the details:
• Commemorative Anniversary Mug (yes, we said Mug…we don’t do taster glasses)
• 8 -12oz pour tickets
• Access to all beer tents and cask beers procured by Cask Ale LA
• Dunk Tank with very special guests.
• A killer photo booth
• Live Music from local bands
• Last but certainly not least, all ticket holders will go home with a bottle of our special anniversary beer* – an Imperial Brown Ale with Graham Crackers which has been aging in Corsair Whiskey Barrels. *One Bottle Per Person.
Tickets are only $50.00 per person and are available for purchase online as well as at the brewery.