Thanks to the stupid unvaccinated we are still not out of the woods, so it is no surprise that this happened…

“First, while the anniversary party may be postponed, our special anniversary beers are not. We’re so stoked to share the brews we’ve been cooking up behind the scenes with some of our friends/collaborators. Keep an eye out for those special releases in the weeks to come!

And secondly, we’ll be offering some “Almost Anniversary” packages that’ll include KHBC merch and a 4-pack of exclusive beers. More details to come, but don’t sleep on these packages cos they’re sure to go quick!”

For many months we have seen anniversaries go by without any celebration due to the pandemic, now we are starting to see more pop up which brings us to AleSmith which is on year 26. Follow their social media to see details on their plans as they arrive.

Each year, I buy the latest Firestone Walker Anniversary Blend and also bring out the oldest one that I have. Then I review them. Here is old vs new for 2020.

24 – big tan head quickly bubbles away to practically nothing but super dark brown. Sugar and fondue on the nose. Getting rum and sugar flavor wise. No burn on this at all.  Very smooth but there is a bit of cola bubble too. Tiramisu / custard notes send this into dessert territory.

19 – dark brown with bubbles. Caramel in the aroma and the first big hit of flavor.  Still an alcohol burn here which makes it a bit prickly.  There is a tiny bit of spirit barrel flavor coming through as well. Still well carbonated after five years. My little cap popped off and flew across the room.

Grand RE-openings. There are going to be quite a few if people in Texas and Wisconsin are any indication when given any sort of quasi-approval to open the doors again. Previously, I talked about the simple ebb and flow problems that will arise when a taproom reopens but what about bigger parties?

There are breweries that were just about to open, breweries who will be ready this summer and a backlog inventory of missed anniversary parties in the second half of the year.

How do you creatively balance the celebration aspect with the safety aspect?  On Mother’s Day not only were people viral video complaining about the wait times at Red Lobster but they were going to church, sick.  Less than a week later 200 people were sick.  From 1, one person.

How do you get beer fans to your brewery and then keep them safe and in a fun mood?  I do not have the answers.  I have been visiting breweries to pick-up only with a mask on but I understand if people are not comfortable with gatherings.

I would say that providing branded masks would be a good start.  Having a hosted video of parties would be good as well with options for VIPs to get beer and special video.   Sending beer to EMTs or hospitals would be good. Maybe doing a drop off for the hardworking grocery store workers.  Creativity will need to come to the fore.

I am a little hesitant about talking about future beer events but hopefully, Smog City will be able to get fully “Canimalized” come May 9th. Laurie and Porter always throw a fun party with loads of rare and fun beers. So mark this on your calendar.

Each year when I buy the latest Anniversary beer from Firestone Walker, I crack open the oldest bottle that I have which is 6 years old at that point. Which means that number 18 is the lucky number. I now only have two of the old school 22oz bottles left before the format went down to 12.

Here is my review of 18 – I get a bit of cola upfront here.  Dark brown in color with not much head to it. A bit of spice and caramel come to mind. Does not taste heavy and is probably middle low in carbonation but not silky, more spiky to me.  A tiny bit of vinous quality to me as well.

That date sees a pile-up of anniversaries to choose from…

And the longest runner is Alosta Brewing out in Covina who celebrate # 6.

First aroma off this bottled the day I popped the cap DIPA is tropical. Fruit forward. Then the bigness kicks in. I would call the flavor imperial and not double. Oaky notes and dankness take over. Pine needles peek through. This one burns. A real palate wrecker.

On this last day of L.A. Beer Week, let’s look ahead to July!

I know we are all recovering from the previous days but in just one week Dry River Brewing will be celebrating their 1st year in their cool little space. 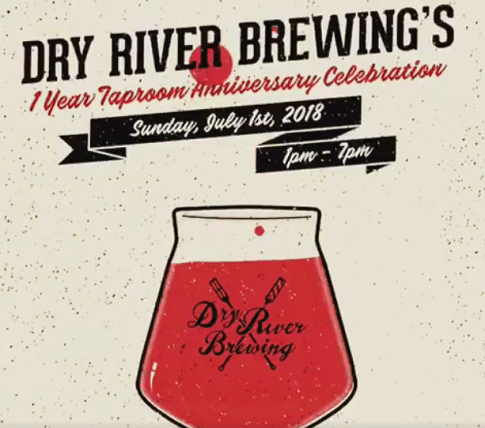 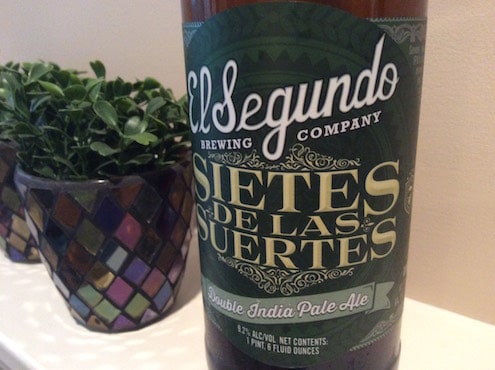 This 7th Anniversary IPA from El Segundo Brewing pours as clear and pale as a Pilsner. Aroma is fruit punch and dankness mixed. This DIPA is both light and heavy at the same time. Initial part of sip is lively and bitter, then the weight of the ABV starts to weigh heavy. Ends up being very grassy and herbal with a tiny touch of orange peel. A really well executed balancing act.