Recently, two beer items popped up at the same time so I took it as a sign that I should talk about it.

First, All About Beer magazine had a blurb about table taps. OK, it’s got the marketing name of DraftMaster. Two tap handles rise out of the center of the table so you can pour your own beer. 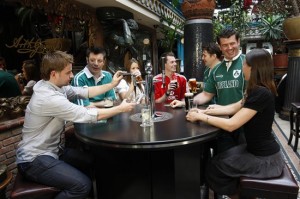 I can so see why this would go over well with publicans. Saves time. People will order more because it’s right there. Technology probably hits the credit card whenever a pint is poured. But to me it just promotes the drink all you want culture and speed. I try my best not to race through beers. (Some are so good that I do it anyway). It also eliminates the creation of a rapport with the barkeep. But what scares me most is that it, in the end, promotes a homogenization of beer. You could have different beer at each table (that would be kinda cool). But then some tables would always be vacant while others would have lines going out the door. I would not give up an Upright or Drakes table easily.
To avoid that scenario, either each table would have the same beers or at least one common denominator, usually the lowest. And how do you know your table has a full keg?

The second dispensing system has the inventiveness of the first, plus some. But whereas the DraftMaster is a sure fire economic barnburner. The Biero idea may end up being too costly. I saw this earlier in the month on the fabulous Brookston Beer Bulletin. 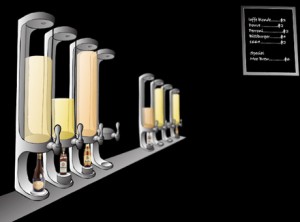 Basically it takes bottled beer and puts it into a chilled and light protected tube so that patrons can see the beer. From what I have read on their site, they love beer and have thought of most of the technical issues, which shows how far beer culture has grown. But I don’t know how feasible it is. To compete with great tap beer, you would need a hook. The one I see is rare beers or perhaps blended beers. And that could work if they get the price point right. And I would certainly enjoy trying a rare beer that I normally couldn’t get because of price. But is the public ready for what is basically a cellared beer bar? I know Cascade opened a sour beer bar. But I worry that this a good idea ahead of its time.