A brewery that I had not heard of before is making quite the interwebs buzz. Buzzards Bay from Massachussetts has created a serialized beer with a mystery on the label.

““The Case of the IPA” is a hard-boiled detective farce printed chapter by chapter on 12 bottles of a newly released India Pale Ale. Each 22 ounce bottle not only has 22 ounces of brilliantly deduced IPA, but also 1 of the 12 chapters of the story. Each case has 12 bottles, which makes for the entire tale told in a case. And so, the Case of the IPA is indeed a case of the IPA.

Brewer Harry Smith proposed the idea to author Paul Goodchild and they quickly agreed on a format: a noir-ish detective serial. Smith brewed up a batch of hoppy craft brew whilst Goodchild penned the story. It’s a mystery of zany brewers and their intrigues; sure to tickle the ribs and please the belly of any fan of craft beer.”

And here is the first installment (not the beer, the mystery): 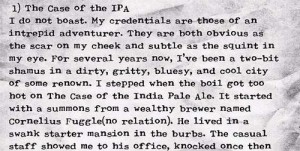