First things first. At the 2016 LA IPA Festival, 3rd Place was Lupulin River from Knee Deep. 2nd to two-time winner Noble Ale Works with That’s Unpossible and the winner was Bonkers IPA from Highland Park. (When that beer is fresh, it is insanely good so I totally understand it winning).

Secondly, do not even try to get in on opening day. Yeah, you will miss the winners mentioned above(they always tap out the first night) but you will save yourself waiting in line and being jostled around like a pinball. Plus you won’t have to put up with whiners who will complain about the lines as if it were some strange otherworldly happenstance that makes IPAs popular. And my favorite reason: flights so you can taste the variety of hops on tap.

I showed up fairly early for a lost hour Sunday and started with a flight of four ranging from the new-to-me, Jambi from Mason Ale Works in Oceanside to The a Winning Team from local favorite Eagle Rock, Stolen Valor from Arts District and the much hyped Peter David inspired beer, Hops are a Preservative from Transplants Brewing. ERB may not have won the voting but it won my first taster tray. (as it did in the People’s Choice Awards too) 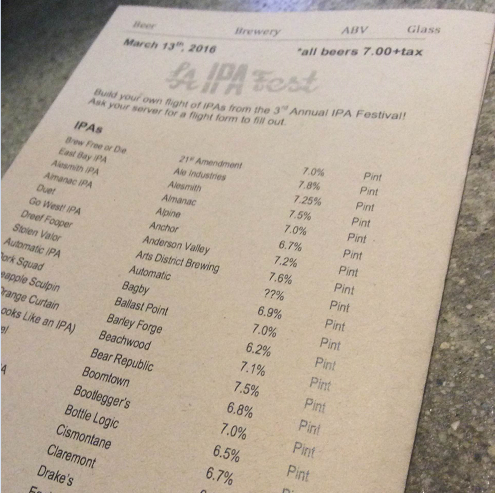 Tray #2 included Recursion 8.0 from Bottle Logic, Anthia from Unsung Brewing of Orange County, Hop Drizzle from Honey Wagon and finally Inclined from Santa Monica Brew Works. The aroma and initial taste of Anthia was the best of both groups but I would still choose the Eagle Rock beer the winner of my informal tasting. Odd, that this group was uniformly yellow in color while group 1 ranged from amber downward. 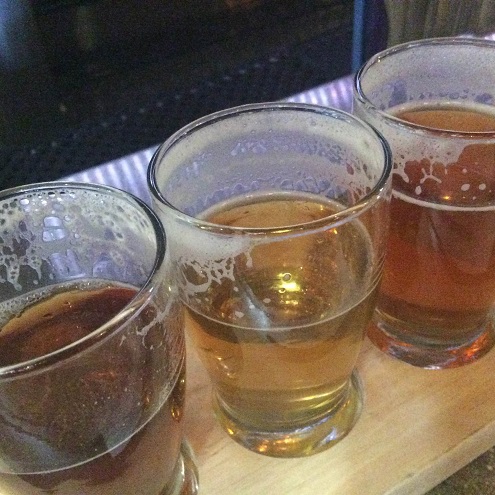