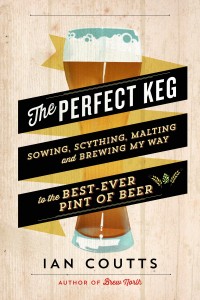 Perhaps word has gotten out that I love books about beer.  Because every twice-in-a-while, I will get  a new book to read and I was glad to get The Perfect Keg by Ian Coutts.  With the appended longer title of “Sowing, scythng, malting and brewing my to the best-ever pint of beer.”

What I liked most about this book was the honesty.  This isn’t a book about going from point A to B in a straight and unerring line.  This is a book with fits and starts.  There are learning curves and mishaps.  Two steps forward and one back.  But it is written in such a go-get’em tone that you are rooting for Coutts to make that Perfect Keg a reality.

There are home-brew recipes sprinkled throughout the book but not being a brewer home or otherwise, I was more interested by the the process of really doing a “local” beer.  There is a lot of lip service paid to local and community driven beer whilst deliveries from across the world come in the back of the brewery.  And I think it is very important to be more transparent about the whole affair.  If brewery A can only afford malt from a certain place then so be it.  There is no dishonor there.

And this book, though ostensibly only about brewing one special batch at home with local malt, yeast and hops really brings the point to a sharper point.  What do you do if the malt isn’t coming out of the ground in enough quantity?  How do you coax hops to grow in an area not conducive to hop bines?  What is the history of brewing in the area?

There are trips to professors of Agriculture.  Talks with brewers and farmers here that will add to the craft beer fan’s knowledge of brewing.  My favorite section of the book though is about the whole malting process and all of the conflicting advice and wisdom that is out there.  And trying to cobble together a Rube Goldberg malting set-up is one of the funnier (now, probably not then) parts of the book.

This is an easy and fun read that has a lot more going on than the typical craft beer book.

I also got the opportunity to ask the author Ian, a few questions.  Some will appear right now (others in Beer Paper LA in the future)….

1. How do you compare the beer scenes in Canada and the US?

We are a) catching up and b) slightly ahead. Let me explain. I think in most of English Canada, we are playing catch-up with the U.S. Despite all the jokes that Canadians traditionally made about American beer, honest Canadians have known for a decade or more that the Americans were way out there in terms of imaginative craft brewing – think of those West Coast Pale Ales that have conquered the world, for example. To my mind, craft brewing here for the longest time was still stuck back in the early days when a slightly hopped brownish ale could occasion utter hysteria. But I think we’re catching up.

But then there’s the slightly ahead part. And that’s Quebec. Beer-wise, they don’t just march to the beat of a different drum, it’s a completely different band. When craft beer started to take off in the 1980s, they were in there with live yeast beers, decades before anyone else. Belgian styles, French styles, beers made with spruce needles or hibiscus – even without any malted grains at all — craft brewers there will try anything and the audience is always up for something new.

2.  What Canadian breweries do you suggest Americans get to know?

That’s a tough one because, as in the U.S., craft brewing is highly regional. I am sure there are fantastic beers in British Columbia or Nova Scotia that I have never heard of here in Ontario. But I can recommend a few from my part of the world. Beau’s does neat beers – one-offs, seasonals, they keep mixing it up. I like Church Key’s Holy Smoke – made with smoked malt, there is nothing else quite like it up here. And then there’s Quebec. Three firms there that do daring beers are Les Trois Mousquetaires, Le Castor and Grimoire. Unibroue was one of the first Quebec craft brewers. They were bought out, but still do good stuff. And if you ever find yourself in the Ottawa region, cross the river and head for a shop called Bieres du Monde in Aylmer, Quebec. This guy stocks 300 different beers – all from Quebec.