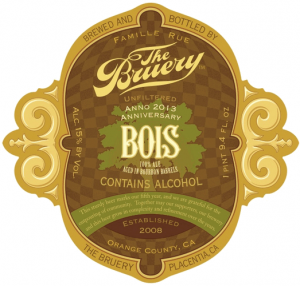 Here is a peak at the pretty label for the latest anniversary beer from The Bruery.   “Bois” is French for “Wood.”  Each year the names of the anniversary ales correspond with traditional wedding anniversary gifts as translated in the French language.  Though I don’t recall getting anything wooden on my fifth.

These are big blended beers that utilize the Solera method where each beer is partially comprised of a blend of past anniversary beers.  So you will taste Fruet and Coton and Papier in Bois.