What happens when you replace Greg Koch with “multi-talented actress, comedian, podcaster and homebrewer Aisha Tyler”?  You get Stone w00tstout 2.0. 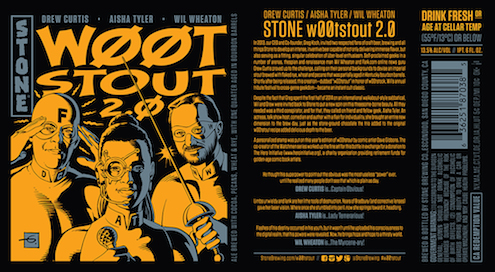 “The original recipe for Drew Curtis/Wil Wheaton/Greg Koch Stone Farking Wheaton w00tstout drew on each collaborator’s personal background and included wheat (i.e.: Wil WHEATon), rye and pecans, with a portion of the beer stored in bourbon barrels for two months (honoring Curtis, the Kentucky Southerner) and then blended with the rest of the brew. This year, ChocoVivo Cacao was added to the recipe for a chocolate complexity, enhancing the already deep, roasty chocolaty and coffee notes. The result is a robust, full-bodied beer with pronounced notes of cocoa, coffee, black licorice, oak, nuts, vanilla and bourbon.”

Now I thought the original showed promise but ultimately didn’t reach what I thought the long description was detailing.  The verbiage is as long as ever and hopefully the recipe tweaks will make an improved beer.

“To give this year’s special edition bottle a pristine flair, famed comic artist and co-creator of the “Watchmen” series Dave Gibbons was commissioned to design the label. The new bottle features illustrations of Wheaton, Curtis and Tyler as superheroes–The Myrcene-ary, Captain Obvious and Lady Temerarious, respectively–equipped with special powers (theoretically), capes and masks. A heroic gargoyle emblem is also included on the bottle neck. At the request of Gibbons, Stone donated the label-design commission fees he would have received to The Hero Initiative, a charitable organization providing retirement funds for golden-age comic book artists.”

The label is still cool though.  I am sure to see many a Stone fan wearing this shirt at fests in 2014.