“Host Mark Ciocco has announced the theme for The Session #105 and it will be Double Feature!

So your mission, should you choose to accept it, is to drink two beers, compare and contrast. No need for slavish tasting notes, but if you want to, that’s fine too. The important part is to highlight how the two beers interact with one another during your session (pun intended!) For extra credit, pair your beers with two films to make your own Double Feature. Now, I’m a big tent kinda guy, so feel free to stretch this premise to its breaking point. The possibilities are endless!”

Here on the Left Coast, we have a slight taste for IPA’s. With store shelves filled to bursting with hop bombs, I could easily have just grabbed two or three to compare for this Session but have decided instead to go East and compare/contrast a quasi-Session IPA and a new IPA from Victory Brewing in Pennsylvania. As well as notes on the can designs.

Headwaters Ale pours a very clear orange. There is a slight citrus aroma. The beer has a tannic quality to the point of reminding me of Orange Pekoe tea. This style has many entrants that I find are too watery. A good Session IPA should be reminiscent of the brewery’s Pale and IPA just not bogged down by as much malt and hops. Headwaters has a big hop flavor which I appreciate. And the can design is both warm and inviting but also uses the hop design to layer in a river motif. It can be hard to create something new with the ubiquitous hop but this works. The layout with the beer description, ABV and OZ. measurements are well done, though I would replace the Ale box with IBU’s instead.

Vital IPA is a grand claim for an overstuffed beer category. But this beer brings it for me. This IPA poured much lighter than Headwaters with a bright yellow hue. At first the aroma was the Simcoe cat pee that I can tolerate in smaller amounts. But then underneath was passion fruit and mango and maybe even a touch of melon. Despite that fruit forward nature, the bitterness has a lingering harsh bite. Not in a bad way but it certainly lets you know that it is there. Design-wise, this seems a little too thesaurus-ish for me. The background is too busy for my taste with all the flavor and aroma descriptors. The main logo is fine but a little too old fashioned for what I think of when I see the word Vital. 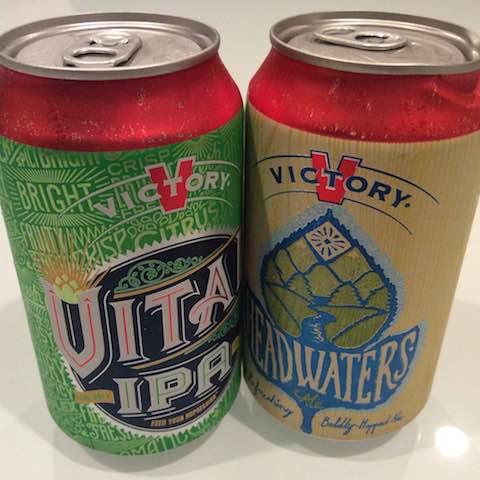 Both beers would not have been out of place on taps here in California. Headwaters would match up with Ponto or Easy Jack and not be considered weak. Vital has the fruit notes that you would see in Citra dominated IPA’s out here. So, instead of trying to compare one to the other, I ended up thinking of where I would rank them against the beers in each category and I came away from this drinking session thinking that they would be favorably received, if not fully mistaken for West Coast beers.

I didn’t follow instructions to the letter when it came to the movie half of the equation. I didn’t watch one movie, let alone two when tasting these beers. I am not a good multi-tasker and I would have paid less attention to either the beer or the movie if I had attempted to pay proper attention to both. But when I was drinking my canned Pennsylvania duo, I kept flashing to the pair of bio-pics about Steve Jobs. Biographical movies are as in vogue as ever. Just like IPA’s.

The Ashton Kutcher version would be paired with Headwaters because it is the lighter and more traditional take of the two while the now in theaters version with Michael Fassbender would be paired with Vital since it is focused on three product launches and how they affect the title character.

Now I just have to sneak a beer into a movie theater.