March Madness is almost done and it is time to settle in the heart of spring. That means reading about apples and hops and agriculture since it is integral to our beloved beer. Plus the following monthly features….

~ e-visits to three breweries from Oakland, Sacramento and Anaheim. Trebek says, where Golden Road has plopped down “local” pubs.
~ special featured reviews of Double / Imperial IPA’s
~ Heads-Up on Los Angeles Beer Events
~ Three suggested beers to buy this month. One light, one medium and one dark
~ A Book & A Beer reads The Apple Orchard by Pete Brown
~ I will tap the Firkin and give my no holds barred opinion on the craft beer world.

Is it just me or are the shelves filled with frooty IPA’s? And are there more and more beers above $13 for one bottle? Here are three options that are neither on this tax due day.

~MEDIUM
Ex Novo/ The Most Interesting Lager in the World 5.00% ABV
Crisp and refreshing, this Mexican Lager was brewed with Vienna and Pilsner malts with a hint of flaked corn.

~DARK
Eagle Rock/ Equinox 6.60% ABV
As the winter thaws and the daylight hours lengthen enough to balance with the night, it reminds us all that spring is in the air. The aroma of citrus, and the taste of Muscat grapes, starfruit and freshly cut grass are a refreshing blend in this young sour ale. The perfect balance of sweetness, an intriguing tartness, and subtle hop bitterness are like a cool spring breeze in the warmth of the sun.

Water retention is up in NorCal but the weather has been 99% dry here in SoCal. Maybe April will bring some wet weather which would be better for drinking some cozy up by the fire stronger beers. Maybe that is just the hopeful April Fool in me.

~ e-visits to three breweries in North Carolina and Georgia. The theme being states under fire for possible/future oppressive laws
~ special featured reviews of beers from Portland (continues)
~ Heads-Up on Los Angeles Beer Events
~ Three suggested beers to buy this month. One light, one medium and one dark
~ A Book & A Beer reads the One City-One Book for Glendale.
~ I will tap the Firkin and give my no holds barred opinion on the craft beer world
~ … and Session # 110 is hosted by ME! and covers the topic, “Twitter”

Here are two events to get your April started in the Los Angeles craft beer world:
1) April 1st – The Doughroom will tap a rare keg of Panil Barrique.
2) April 3rd – Southland Beer will host a sipping session with Tahoe Mountain Brewing

The theme this month is numerology. You have the 5th Game of Thrones beer with a menacing raven, the third addition to the Zymaster Series and the 2015 edition of some funkiness. A relatively heavy group of high ABV beers.

~LIGHT
Brewery Ommegang / Three-Eyed Raven7.2% ABV
” Three-Eyed Raven harbors a deep dark brown, almost jet-black color with a light tan head. Yeast forward aromas are packed with peppery phenolics and fruity esters. Despite what you might expect from a dark hued beer, the flavor brings to mind a traditional saison: a light, malty body with a hint of sweetness, and roast accentuated by herbal and spicy hops, yet underpinned by pleasant yeastiness. Finish is crisp, with lingering notes of herbal hops and Belgian yeast.”

He’Brew / Funky Jewbelation 9.4 % ABV
” The 2015 incarnation of Funky Jewbelation will hit your glass as a deep, groovy brown, with a thin white head that dissipates quickly, leaving behind a funky tart aroma that comes after allowing a blend of certain beer to chill in a collection of far-out barrels for anywhere between a few months to over a year. The flavor of 2015 Funky Jewbelation is going to provide more hop character than most funky beers have seen, this dynamite quality comes from American hops we used to bitter and flavor one of our base beers, allowing a truly gnarly experience for all to geek out on!”

Be on the lookout for craft beer hijinks today!  Lot’s of bad and obvious ones will mask the truly brilliant pranks for April Fools Day.  But it is no joke that there will be loads of good content right here at Beer Search Party, including…..

~ e-visits to three breweries along in England such as Pressure Drop, Five Points and Burning Sky
~ video reviews of two beers from New Belgium
~ two more beers will come up from the BSP cellar to be reviewed. This month Brouwerij Lindemans
~ Heads-Up on Los Angeles Beer Events
~ Three suggested beers to buy this month
~ I will tap the Firkin and give my no holds barred opinion on the craft beer world
~ … and Session # 86 will converge bloggers onto a single topic, this month What is the state of Craft Beer Journalism

Enjoying the gamut of craft beer on a budget. It can be difficult simply because of the wealth of choices. LA is behind the craft curve and I could still easily drop many Franklins (or should I say Dead Presidents) trying to choose between new beers from Cambridge Brewing or barrel aged offerings from Cismontane. And that is not counting just trying to have beer on hand in the ‘fridge.

But you can get by even with less. First off, find places that sell singles or mixed six packs. Trader Joes being one and Sunset Beer Co another here in Los Angeles. That way you can taste a rainbow of styles instead of just one. And if you want to compound the interest, get a friend to get six other beers. Now you have 12 new beers.

When you head to your local beer bar order the sampler trays. At first glance it is more expensive than one pint but you will get a wide variety (usually four to five beers) and it is usually the same per ounce price if you want to do all that math stuff.

The third piece of advice is to not over drink. It is better to have one beer and really enjoy it than to have three or four in one night. More than likely the last one will be a blur and you will have not gotten the most of your money.

Ask for samples. Ask for half-pints.  Don’t be afraid of the bar staff. Most places encourage experimentation and will not turn down a customer.  But be responsible and buy something plus tip well.  Otherwise you many not get the same treatment the next time that you land on the barstool.

Don’t let high prices scare you off. A Firestone-Walker Anniversary beer or Parabola is well worth it. If you can’t find a bottle, follow your favorite brewery on the interwebs to find special events where the possibility of getting a taster for less money may happen.

Lastly happy hour is your friend. Use it.

No foolin’! April is yet another busy month for craft beer in Los Angeles.  And I will endeavor to bring you the news on as many events as possible, plus….

~ e-visits to the newest breweries in Arizona plus one that has been around for a spell (Fate, Dragoon & SanTan)
~ video reviews tackles two canned brews from Natian Brewing in Portland plus more beer reviews minus the videos
~ Heads-Up on Los Angeles Beer Events
~ Three suggested beers to buy this month
~ I will tap the Firkin and give my no holds barred opinion on the craft beer world
~ … and Session # 74 will converge bloggers onto a single topic
~ plus many more posts about new beers, beer products and breweries

Beer geeks don’t typically get beer at a major grocery chain. Either the selection is sub-par or the good stuff has been sitting for awhile because the typical buyer is picking up the cheapest or largest box of industrial water lager they can get into the cart.

But the Ralphs near me has really improved of late. Hangar 24. Dig from New Belgium. Some good Widmer bombers and I even saw Sublimely Self-Righteous on the shelf. So I have been making a point to buy beer there on occasion to endorse the changes. Letting my wallet do the talking and taking advantage of the fact that they are tracking my purchases and someone in data analysis will see that I started buying when the changes were made.

And one of those purchases was my April beer allowance money from my wife….. 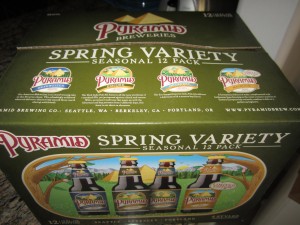 I have heard good reports on the Discord and Outburst IPAs from Pyramid and throwing in a maibock and their decent but not exciting hefe is a steal. And like the first three months. I even saved a bit of my $20 to spend at the end of the year!

This month, I stick close to home with the medium and heavy selections. The outlier being a canned pilsner from Avery.

So onward to Boulder, Redlands and San Diego!

Click the above link which (should) lead to another page. Re-click and a PDF should magically appear!