Continuing the reviews of beers bought from the Glendale Tap cellar, we go old with the 2019 barrel-aged Barleywine release of Old Jetty from El Segundo Brewing.

This ale was aged in bourbon barrels and strides in at 13.2% ABV. Old Jetty is both prickly and smooth at the same time. There is loads of bourbon character but at the same time the sweetness is restrained. A bit of syrup note here. Great brunch beer.

Time to gaze back at the drinking stats that I kept for 2019. Starting with the big picture and then drilling down a little bit.

These beers were distributed geographically as 57 from Los Angeles breweries, 70 from California, 17 were foreign, 23 from Oregon (my home state so I track it separately) and 25 from the other 48 states.

Most popular breweries begin and end with Firestone Walker which had the most check-ins at 53 and ounces at 584. Other repeated favorites were Sierra Nevada, Eagle Rock Brewery, El Segundo Brewing, Angel City Brewery, Stone, Smog City Brewing and Beachwood. All of which are old-school not the hippest breweries around.

Overall, I was 3oz on average below my target goal. A goal that I am keeping steady for the next year. I really felt it when I overdid it and that is because I think my body had re-calibrated to the lower amount. Trying to dive lower might result in even more headaches. Also the easier way to reduce at this point would be to remove another drinking day from the week.

This English beer was first shipped to the US way back in 1990. And Winter Welcome from Samuel Smith’s has been more than a welcome addition to the season.

Now that the California Craft Beer Summit is complete, here are some photos from the State of the Beer State…

Didn’t think that I would continue on in my ever OCD quest of cataloging what I drink? Well, another quarter in the books and this year the goal is to get the drinking finally down to the amount that it will stay. Basically (2) pints a night or less with (2) no drinking days each week. The latter has been in affect since this time 2016.

Where I am really falling down is variety.  A hair over half of the beers drunk are IPA.  A mere 14 being Sours or barrel-aged beers.  75 don’t fall into those three broad categories.  But maybe heading to the Smog City Anniversary this month will boost that sour number a bit.

Lastly, the following are the best beers that I had each week.  Some beers may be on this list that would not win any other week than the one they happened to but that is luck of the draw.

For January, let’s look to the darker side and to devils and doubts.

Each year, I start the blogging calendar with a disclaimer. As a beer blogger, I feel it is important to be clear about my rules of the road.

Every beer, brewery, event, restaurant reviewed on this site whether paid for or complimentary will get the same treatment when reviewed. If I don’t like the beer, it will be described as a beer that I did not like, even if it was handed to me by the brewer and I like the brewer.

If I forget, (which probably will happen, because it has before) to mention how I got a beer or a pass to an event, then go back and read the previous paragraph.

I clearly want the Los Angeles local beer scene to continue to flourish and I want craft beer in general to do so as well. So, my reviews will also take that into consideration. Some points in 2019 will require cheerleading and others require harsh sentences. It shouldn’t take a reader too long to see where I stand. (Probably by January 5th)

I will be as impartial and truthful as I can be while also staying as opinionated as usual.

When I first started blogging about beer, I heard about a documentary in the works about it helmed by Jay Sheveck. News would pop up here and there but then it seemed the project had died on the bine, as it were. 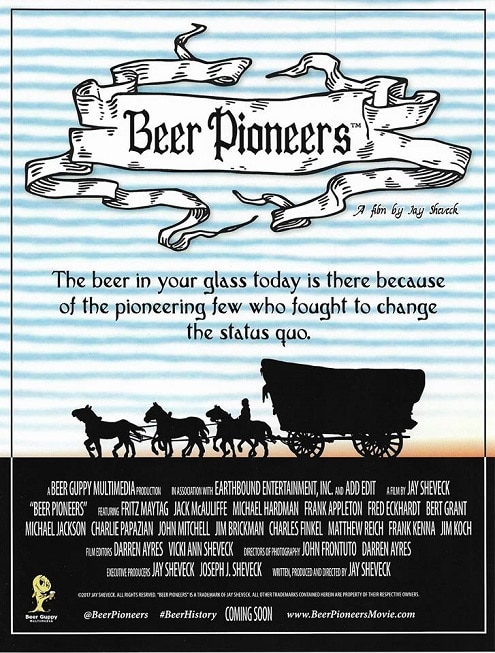 I checked the website and it appears that sometime mid next year, Beer Pioneers might actually be released. (Whether streaming or DVD or subscription remains to be seen)

I do like the New Albion meets Oregon Trail game look of the poster and the roster of beer names is impressive so let’s hope I can review it sometime next year.