Since I watch a “bit” of sci-fi, I will occasionally hear the name Michael Faraday. Finally, I checked out a biography of his life and scientific experiments and toward the middle, I ran across this paragraph that links him to Charles Dickens and the science behind beer. 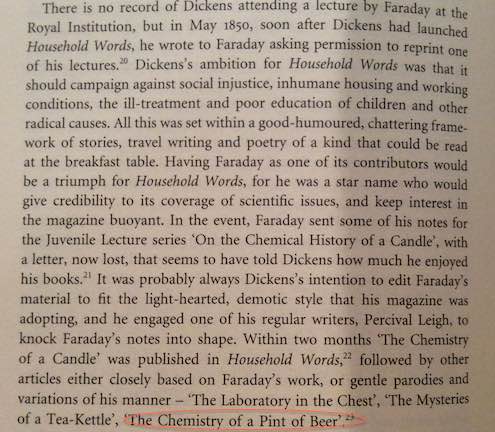 Digging a step further, I found the article on the Chemistry of a Pint of Beer online. And it is a fascinating read. In a short few pages I ran across little gems like these

“There’s a great many beers. There’s porter, there’s heavy, or brown stout, and there’sstrong beer, and ales of ever so many sorts,
and, then, there’s swipes.” What the heck is a swipe?

“….the difference between the beers of different places depends, for one thing, on the kind of water they are brewed from.” So very true.

“By his account, beer was so brewed from potatoes by a Monsieur Dubrunfaut, a Frenchman; and we are told it ‘resembled the beer which is made in Paris.’ Perhaps it may resemble, and something more, not a little of the beer that is sold in London, too.” I like the use of the qualifier, “resembled”

“….to have one’s beer turn sour is a great misfortune, in a domestic and economical point of view.” Not as true nowadays.

“The root of the sweet flag, coriander and carraway seeds, orange-peel, and other aromatics, are also used to give beer that flavour, which, if properly made, it would derive, without any such medical treatment, from malt and hops.” English wit-biers?

“Lastly, there are drugs which are put into beer merely to increase its fuddling power—Cocculus Indicus, St. Ignatius’s Bean, Nux Vomica, or Ratsbane, Opium and Tobacco.” OPIUM!  That is crazy.  Makes the tobacco dry hopping seem tame.

One Reply to “Scientific Beer”