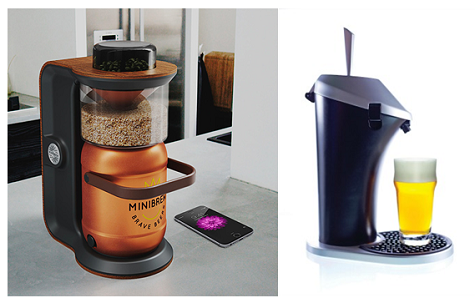 It looks like British competition is in the works for the automated homebrew appliance market. But as with past entrants such as PicoBrew. The MiniBrew system is as costly too. Hitting the 2K mark. With MiniBrew it looks as if you are tied to their ingredient packs though. That would be a negative for home brewers who like to experiment but that might not be the market this product is for. The ease of use is tempting but at that price point, you would have to make a lot of beer for an extended period of time before you broke even vs. brewery made beer. And you have the uncertainty of the beer being good.

If you are a fan of Shark Tank, like my wife is, then you saw the Fizzic’s guys Phil Petracca and David McDonald on the ABC reality show.

Their current product is a tabletop appliance that can fit beer containers from cans to growlers inside to give you the from the tap experience. They have also added a special feature that “sonics” the beer and creates more foam from tighter bubbles. The Sharks loved the creamier textured beer that resulted from that “foaming” but I am skeptical. The price is around $150.00 which seems much for a foaming action.

Some beer styles just shouldn’t be foamed that way is my first issue. Secondly, oxygen is a big beer killer and with an opening that can fit all sorts of beer containers, there will be plenty of oxygen inside eating away at the beer. So one will still have to finish that growler quickly once opened.

There will be a smaller, companion product, the Waytap coming which will be cheaper than the current model but I am a little concerned because they seem to be using Kickstarter and IndieGoGo and Shark Tank more for marketing and getting the word out while also getting money. Even though they have sales and profits plus Venture Capital too.