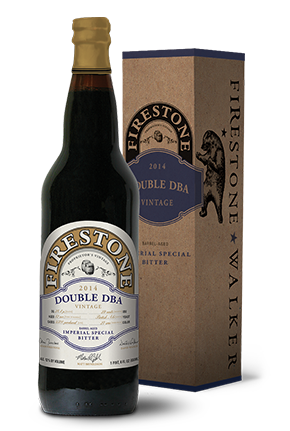 I am a fan of Firestone Walker.  For two reasons.  1- the beer is great. 2 – they treat bloggers well.

And a third reason is that their barrel aged beers are fantastic to cellar.  And one you had better grab plenty of is “the third and final bottled release of Firestone Walker Brewing Company’s barrel-aged Double DBA begins on July 12, setting the stage for an as-yet-unchosen replacement next year.”

D-DBA is being squeezed out due to room.  Even with the major growth of the brewery in Paso Robles and Barrelworks in Buellton, other beers are begging to be bottled and released.  Ones like….Bravo, Helldorado, Parabajava, PNC, Saucerful of Secrets and Brownie Wine.

I have never tasted the last one, so I would vote for that one.  But before we jump ahead, here is the description of what is in the 2014 version of the D-DBA bottle, “the imperial special bitter is Firestone Walker’s flagship DBA brewed at double strength, using twice the amount of malts and hops. As with the regular DBA, the 2014 Double DBA was partially fermented in a union of new American oak barrels. After fermentation, the beer was racked and returned to the union barrels as well as bourbon barrels, where it aged for one year. The barrel mix for the 2014 Double DBA included vessels from Woodford Reserve, Elijah Craig and Four Roses.”

If you don’t get Double DBA now, it is also the base beer for Reginald Brett, a bretted barrel-aged ale which is coincidentally  to be released later this year from Barrelworks.