The new wave of beer apps are making the effort to better match beer lovers with similar beers in the way that Netflix suggests you watch Movie B after you watched Movie A.  The latest to come to my attention via beer buddy Rich is the Beer Mapper app (only for iPad) 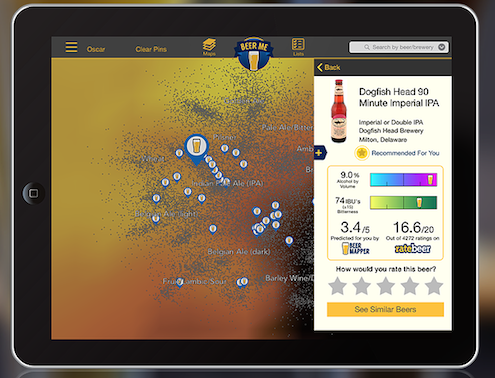 Similar in vein to the Next Glass app but harnessing the reviews of Rate Beer, Beer Mapper creates a visual look to beer choices.

Here is the 411: “Each of the 25,000 beers is represented as a unique pin on the map.  A beer’s coordinates are determined based on how it tastes in relation to every other beer on the map.  The closer the beer pins, the more similar the beers.  Tap and hold on any one of the dots on the map to pull up a beer pin.  Tap on the beer’s flag to find out more info on the beer, find similar beers, or add it to a custom beer list. ”

Currently on sale at .99 cents but will sell for more later. This app looks more complete out of the box than Next Glass.  I will test it out and see if it works.