I am much more finicky with spirits than I am with beer. Tequila will be off limits due to the headaches I get the day after and Irish whisky or Scotch is just too peaty for my taste.

I have found better success with Rye and Tennessee whiskey and so far Uncle Nearest is at the top of my small list. And that is saying a lot because my expectations were high. This brand has had deserved press. It is women owned and women distilled and it honors the mentor to Jack Daniel.

The 1884 is a blessed combo of smooth vanilla notes with a cantankerous ABV hit. I get a little bit of wood character but it is a side player here. I have had it straight twice in two days and look forward to it again. Usually a bottle will sit a bit between visits.

I wish I could find small bottles of the different variants to do a taste test.

As is often the case with Strand Brewing, they tease a new venture in advance and then it gets a little lost before it comes to fruition.

I posted about their distilling a few months back and now, as you can see from the photo, whiskey and vodka under the Strand moniker has arrived.

Available at their taproom to go.

It kind and surprises me that Stone hadn’t licensed the Arrogant Bastard name to multiple spirits by now. A spicy whiskey or vodka probably would have been easy picks. But instead the have gone the whiskey route which I think is probably a better choice. Maybe a Dayfall Wit Gin is next?

I do my level best to stay seasonally appropriate. You don’t see mentions of Maibock in January or oodles of Oktoberfest posts in Summer. But, I am making an exception for this…..

…because, well 2020 needs more spirits and I think this one could make some fine fall cocktails since Southern Tier knows it’s way around pumpkin spice.

Cellador Ales is going fancy on Friday November 15th when they release two Jackson Ranch wild ale variants.  They are whiskey inspired beers as described by the brewery as, “one aged in a High West Double Rye Single Barrel and the other in a Knob Creek Cask strength Single Barrel.”

Cellador will be making cocktails with the beers that night and if you have had one of them before, you know it will be tasty and interesting. 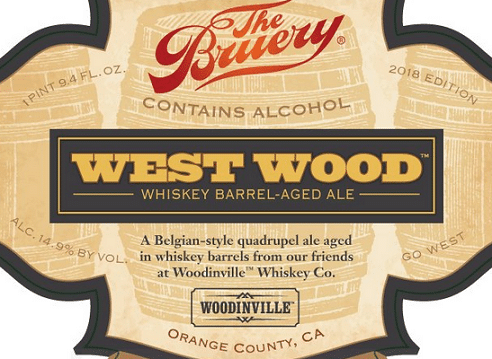 When it is all haze and 16oz cans, it is sometimes good to see a reliable brewery, like The Bruery, lean into their barrel strength and when they use whiskey barrels with a quad instead of stout. I perk up and start reading the label closely. Probably won’t see this one other than at Bruery locations so a trip to Orange County might be in order. 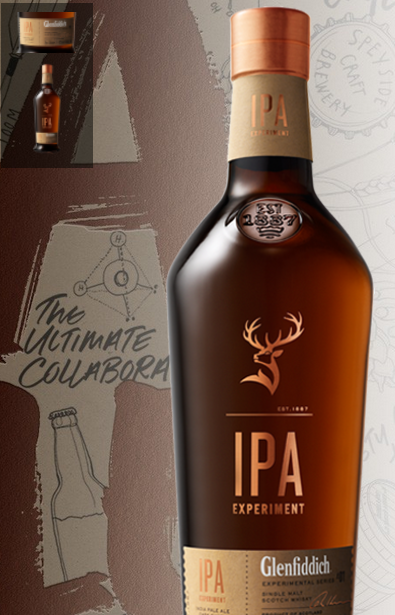 Whisky and beer are connected but sometimes that connection becomes ever firmer when distillers see the maximizing effect of putting the initials I-P-A on a bottle.

But I would certainly try the latest Experimental Series variant from Glenfiddich because they have gone all in to make a hoppy whisky. They collaborated with a brewer to first create an IPA that they thought would impart hops into the oak casks. Hard work choosing from amongst the beers but the 2nd recipe won out and they then had to figure out how long it needed to season the cask that had formerly held Glenfiddich.

All before putting the whisky in and aging it. The distillery claims that they created a whisky with “unique zesty citrus notes of ripe green apple, William’s pear and spring blossom. Complimented by the subtle tang of fresh hops followed by a long lasting sweetness.” 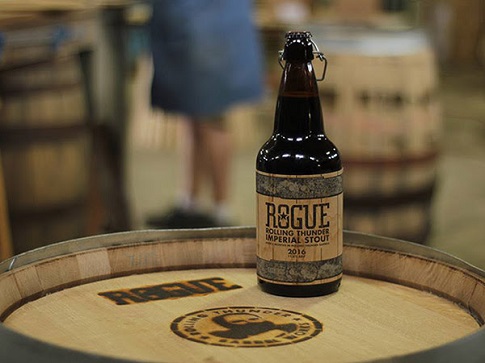 Barrel-Aged can mean different things. A beer can be in contact with an over used barrel or the barrel’s history might be obscured. Some breweries have barrel experts and others don’t. But if you buy Rolling Thunder from Rogue Ales, you will know that the chain of custody was one entity, Rogue.

Now I don’t get excited by the Voodoo Doughnut beers or Beard Beers but I like the fact that this barrel beer is completely executed by Rogue alone.

Check out the timeline:

From Barrel
“Rogue acquired vintage French WW II era coopering equipment before knowing where to put it and who was going to make the barrels. Longtime employee Nate Lindquist volunteered to be Rogue’s first cooper and spent a year as an apprentice learning the ancient art form of barrel making. Using Oregon White Oak, Nate assembles, raises, toasts, chars, hoops, heads, hoops again, cauterizes, sands and brands each barrel, one at a time all by hand. At full capacity, he makes one barrel a day.”

To Distillery
“The barrels are soaked first with Dead Guy Whiskey, which is distilled from Dead Guy Ale. During a year of aging, the Dead Guy Whiskey imparts its flavor into the oak, getting the barrels ready for the next step in the journey.”

To Brewery
“Eight different types of grains, including oats and Rogue Farms barley are brewed with Rogue Farms hops, brown sugar, sweet dark cherries, vanilla and chocolate to create a bold character that is perfect for aging. The Rolling Thunder barrels that once held Dead Guy Whiskey are filled with Rolling Thunder Imperial Stout and aged in the rich, salty air of Yaquina Bay on the Oregon Coast. After six months in the barrels, the beer is ready for the final step.”

To Bottle
“To complete the journey of barrel to bottle, the imperial stout is poured into 1-liter bottles to be bottle conditioned for another few weeks before being released. Rolling Thunder Imperial Stout can be enjoyed immediately or can be cellared for years to come.”

Craft beer isn’t the only alcoholic beverage that is breaking rules left and right. This quick slide show showcases some real cool whiskey experiments. Who is influencing who can be debated but the fact that Buffalo Trace has a Single Oak Project that looks to understand how the wood of each barrel imparts different flavors is really exciting to see.

Because, you know brewers will be getting their hands on the barrels eventually.

Flaviar is an odd duck of a website and spirits idea that I am not sold on quite yet. The website doesn’t seem geared to people who are picky, more to those who want monthly gift boxes.

Much like Amazon, you can shop for individual spirits without buying a membership, which they also refer to as prime.You can choose auto-selected boxes of whiskey, gin, rum and others or you can self-select what you desire. It arrives to you in science-y looking beakers for tasting.

I appreciate the idea as a tool for exploration but without knowing what it would cost to buy the full bottle, I feel like I could get told any price for one of the tasters. The selection looks strong and unique and different from the mini-bar bottles you could normally buy but at a liquor store you can compare prices.

Filing this under, website to monitor and maybe purchase from later.