The Beer Connoisseur magazine with great 20/20 2020 vision launched a new Beer Buyers Club, a partnership with beer delivery service, Tavour. Breweries are shutting taprooms and sales are limited so a good way to support craft beer might just be to have it delivered to you. I have a friend who has used the service and it worked well.

Head HERE to start checking out the details. Use promo code “BC2020” at the Tavour check-out.

There are a few real estate spots in Glendale that are restaurant graveyards. Spaces where the turnover in signage is hotter than an actual turnover.

But this post over on the Tavour blog got me to thinking about the same concept but with a brewery. And here in Los Angeles

The Stalking Horse took over the old Steingarten spot on Pico and with a brewing system and a new British theme have made the spot their own but that is within a restaurant. What happens if an L.A. brewery changed hands? What would need to change to attract a growing clientele to a “new” taproom?

I would say that the beer would have to be easily seen (and tasted) as better. Most beer consumers (heck, most consumers overall) don’t know who is running where they are buying from and might assume that it is a simple name change or brand change. A change in beer style won’t move the needle in my opinion without that quality going up. I am not discounting the powerful effect of branding or a re-design of a taproom space but those get people in the door for one visit.

I think that L.A. will see more “new breweries – old spaces” in the coming years as a way to get over the barrier of entry that creating a whole new brewery in Los Angeles makes you leap. But the outreach needed to get better beer into the hands of buyers will be great.

One-Time beer Podcaster, Richard decided to try out the Tavour service for getting craft beers delivered to his door.

Of course, we had to have a tasting session….and of course the tasting session expanded to other beers not from the service, but the focus is on the two new ales, from two breweries that I had not heard of at all. (And that was just the collaborative IPA) 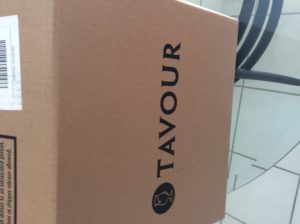 Droste Effect was a chocolate stout from Alewerks in Williamsburg, Virginia. Kudos to the clever name and cleverer label. The beer had a lush chocolate taste that mellowed into what I would call more a porter than a stout. For a beer that is 9.2% ABV, it was quite light once that chocolate faded.

C_LVIN is a collaborative kind of East Coast IPA from Abandoned Building Brewing and Brewmaster Jack. Another example of a great brewery name. The ABB IPA was orange and a touch hazy. There was a good mixture of earthy and dankness. It was strong enough to make me mark down the name for the future.

Other beers drunk were the La Quinta Indian Canyon IPA which was rather blah. Drinkable but nothing leapt out, Brouwerij West and The Dog Ate My Homework was a lovely red color and quite lively. I made a complete hash of the pour and got pink foam everywhere. King Swirly the 2nd was a real stout with a lot, a lot of vanilla. Little Brett from Allagash was my favorite. Farmhouse meets golden ale with a touch of hop to it.

Tavour.  Doesn’t scream craft beer on the interwebs.  But here it is.  Seems easy as long as your inbox isn’t already filled to the brim with beer related emails already. 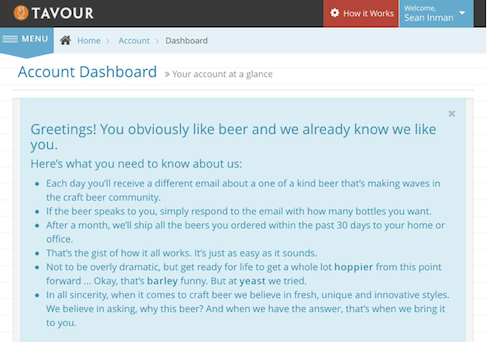 More to follow if I try it or hear more news.