In case you did not keep bottles of Firestone Walker’s Parabola since 2012 or don’t have three years worth of the Anniversary blend, then the Surly Goat will be able to make that rare dream possible.

On Thursday, May 4th 6:00PM will have this incredible bounty of beers: (Yes, it is a long list and I left the TBD’s there to make even the most jaded beer snob giddy with possibilities….

Now that Herr Gropenfuhrer has been installed as POTUS and the contractors at the White House are getting stiffed on invoices, it is the time to drink up, for the end of the world is nigh. So keep checking in to see what to drink and where to go in L.A. in February.

~ e-visits to three breweries from around the world like the Hong Kong Beer Company and Microbrewery Le Castor + 1 more.
~ special featured reviews of Beer Duos.
~ Heads-Up on Los Angeles Beer Events
~ Three suggested beers to buy this month. One light, one medium and one dark
~ A Book & A Beer reads Dark Matter from Blake Crouch.
~ I will tap the Firkin and give my no holds barred opinion on the craft beer world.

We head into the second month of the year and more beer around the L.A. area. And a trip to Portland as well to do some new brewery hunting.

~ e-visits to three breweries from the pages of All About Beer magazine (again, but from England) including Brew By Numbers, Tiny Rebel Brewing and Howling Hops.
~ special featured reviews of beers from Founders Brewing of Michigan + a pair of Gose’s
~ Heads-Up on Los Angeles Beer Events
~ Three suggested beers to buy this month. One light, one medium and one dark
~ A Book & A Beer reads a novel co-written by Laker legend Kareem Abdul Jabbar
~ I will tap the Firkin and give my no holds barred opinion on the craft beer world
~ … and Session # 108 covers the topic, “Snowbound”

Here are two events to get your February started in the Los Angeles craft beer world:
1) February 4th – Bell’s Hopslam release at the Surly Goat
2) February – 10th – Bells’ Hopslam at the Glendale Tap

Now the surliest of goats is open across the hill! 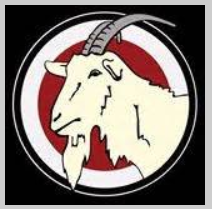 That’s right Encino is home to a valley version of Surly Goat.

The location was previously branded as Sweeney’s Ale House but that concept was scrapped for the tried and true of Goat-ness.

Two things that will convince you to be at…

Be there at 7pm sharp!


Thanks to the Four Point Sheraton and the beer crew at Brewsters. Congrats to the Surly Goat team. 2012 Champions. And thanks to Dogfish Head and Sam Calagione for coming in from the East Coast with their great beers.

what is going down tomorrow night, Thursday, July 21 at 6pm. 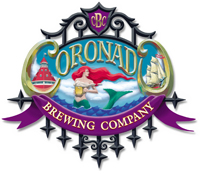 Saison by the Sea – 7 % with chamomile, ginger, spearmint & grains of paradise

Saison by the Sea is one of my new favorites and the cask selections at Surly Goat always surprise. So check it out.

…the kick-off to the latest announced collaboration between Dogfish Head and The Bruery.

I started off my Surly Goat night with The Wanderer from The Bruery. This is another semi-rare Bruery offering. This one was brewed for the excellent City Beer Store of San Francisco (that if you haven’t visited, shame on you).


It was tart but not puckery with great raspberry/cherry notes. I could see this paired with ice cream.

After a somewhat desultory tasting of Red & White. (just didn’t work for me), the night was concluded with 90 Minute put through a “randall” with Intelligentsia coffee. Wow! The aromatics were amazing. And it carried through into the flavor. Tasted like a coffee amber. Delicious. 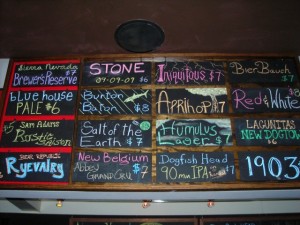 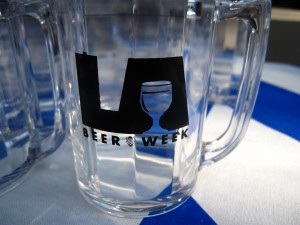 Two events to talk about today:

Stone Archival at Tony’s Darts Away.
I have to admit that I had planned on visiting the Oinkster for Craftsman beer and BBQ. For whatever reason, I thought I could just mosey in an order some cue and a beer. It was not that kind of event. And I missed the ticket window. Bummer for me. But the great thing about LA Beer Week is that there are other things to do!

So I headed to Burbank for more Stone. I had a nice glass of the 09/09/09. It was rich and mellow. Belgian notes had really receded to the background and added a slight tint at the end. The orange and vanilla talked about when it was brewed had also faded a bit. All in all, a lovely dessert beer if you have any and are willing to open it now. 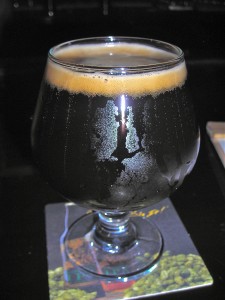 I was going to have another Double Dry-hopped Sublimely Self-Righteous but the taps were pitching a fit. The crew at Tony’s soon got the snafu fixed and had to play catch up with the large and growing crowd. So to finish, I had another San Diego beer. San Salvador Saison from Ballast Point.

This is what the brewery says about it, “The idea started as a San Diego Farmhouse Ale using local ingredients. We wondered what the Kumeyaay Indian’s were eating when Juan Rodriguez Cabrillo climbed out of his flagship boat, the San Salvador, and onto the shore of Ballast Point in 1542. Also, what might have Cabrillo stocked on his boat before he left Acapulco (then called Navidad) 3 1/2 months earlier? So with some research we tracked down a fun mix of ingredients for a Belgian inspired San Diego indigenous Ale.

With some help from our friends at The Linkery, North Park Native Plants and Wingshadow’s Farm we were able to track down ingredients like corn, pine nuts, agave, elder flower, white sage, manzanita berries, curacao and local sage honey. The malt bill consisted of Belgian pale malt, caramunich, biscuit, wheat and corn. The result is a 7.5% ABV, brown beer that really has to be tasted to be understood. It tastes like the San Diego countryside.”

As you can see, it is a beer without a category. Is it brown, saison, regular Belgian? More the first with a bit of the latter and not the middle. A very good beer with lots of individual flavors. Just don’t order one hoping for a saison.

Last night, again I was not vigilant enough to the Beer Week Calendar. I thought I could saunter into the Surly Goat and maybe have cheese and beer presented by the Hot Knives. Well, A it was another sold out ticketed event and B, it wasn’t even at the Surly Goat!

But again the depth of events saved me. Surly Goat was pouring some special Maui Brewing beers. I tried Ode to Carol which either didn’t survive the journey to the mainland or was one of the lightest Belgian ales on record. I also had their Hula Honey Lager which was only OK in my book. Others at the bar though really enjoyed it.

3 DAYS LEFT. Be sure to check out all the happenings at the LA Beer Week event page.