Back when SABInBev started buying up craft breweries, it became evident that they were pursuing a geographic fit first followed by style categories. Now there is a new player from the craft sector, Legacy.

I don’t mean to paint Legacy and by extension Ninkasi Brewing of Eugene, Oregon out as a global villain. An acquisition strategy written down is often different from what plays out so it will be interesting if any California breweries are on the list of future possibilities since Legacy has now bought one brewery each in Oregon and Colorado.

I will keep the blog updated if anything happens in SoCal.

I almost put Adjustment Day down multiple times. Pretty much every time that Palahniuk mentioned Fight Club as a meta reference. The central revolutionary thesis is fine and probably plays well to a certain crowd who want to burn Trump down or split away from the 1/2 of the country they don’t agree with.

But I thought the idea that a country needs to cull itself of excess testosterone (i.e. males) to keep the country moving to be a much more interesting tack than the whole “adjustment day”.

I also wasn’t really super keen on any of the characters. I am fine with no central lead or an anti-hero but there was no character that I could really follow all the way through the through-line, as it were. Especially through all the spasms of violence that occur.

So, I can’t recommend this one but I can recommend some beers that would pair with it, if you are intrigued by the book or a Palahniuk completist.

Ninkasi Brewing – Day of the Red
Eugene gets name checked in as one of the centers of revolution so go with this horror themed beer from Ninkasi.

Part of the book is set in Atlanta, and considering that and the name of New Realm, I had to pick this bitter beer.

Closer to home, the also aptly named Liberation Brewing in Bixby Knolls has an Autonomy Amber that would be a good choice as well.

I was surprised late on a Thursday night by the FedEx guy with a box from Eugene, Oregon. Inside was the latest IPA from Ninkasi, First Rule. 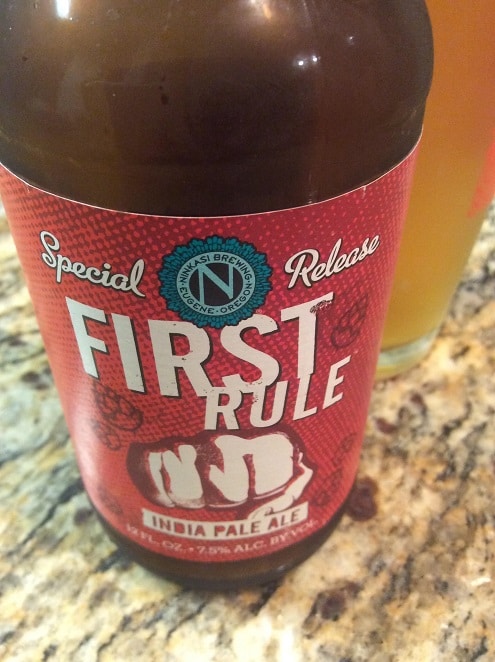 Perhaps Fight Club was on Netflix and that is the reason for the name, or that the movie is old enough that no cease & desist would result. Either way the fist on the label, promises a punch of hops. But what I get is a minty/grassy aroma. The ale pours a slightly unfiltered orange color. AS the beer warms up a little I detect a citrus bitterness with my tastebuds thinking lime as the lead. The barley is hidden way beneath the bitterness and citrus. A solid IPA with enough differentiation to make it noticeable in a crowded style field. 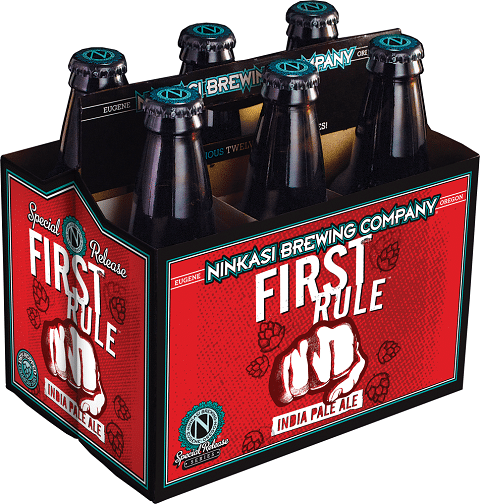 Some lines from movies endure and even people who haven’t seen Fight Club know what the First Rule is. An IPA!

For those keeping hop score at home this IPA has a hop profile that includes El Dorado, Calypso, Mosaic, Simcoe, Citra, and Amarillo hops. 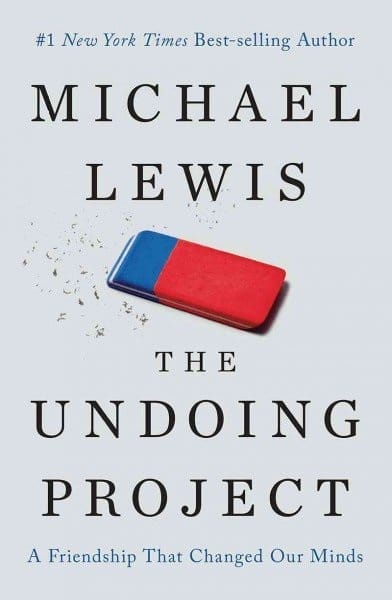 In the Undoing Project, Michael Lewis relates the story of Daniel Kahneman and Amos Tversky, two Israeli psychologists who asked the question, “How does the mind work?” But they looked at the question from the point of view of decision making.

By pushing together various fields into psychology this unlikely duo was able to come up with some extremely contrary, at the time, findings about how we humans choose.

I usually find no fault in a Lewis book. Moneyball was a fascinating look at the person and the process at the same time. The Big Short took a complicated economic problem and made it so relatable that a movie was made from it.

Undoing though starts with a really long ramble about an NBA general manager that, to me, only tangentially connects to the two people in the book and from that point on, Lewis seems to be split between focusing on the theory or the people behind it. The two halves just don’t fit together even though the pair’s working relationship is fascinating and their work is too.

To pair with this book, you need to travel to the places in America where they did work. Eugene, Oregon, Michigan and the Bay Area….

Ninkasi Believer Double Red Ale – “Multiple kinds of caramel malts are used to create caramel, toffee, date, fig, subtle chocolate, and a hint of roasted malt complexity. The hops lend to an earthy and floral hoppiness to balance the malt. The balance of the two aspects with the alcohol content make for an incredibly drinkable and full-flavored beer.”
Founders Palm Reader – “A tribute to our beautiful state, this refreshing ale is made with Michigan-grown Crystal and Zuper-Saazer hops. Derived from Saaz, a traditional noble hop hailing from the Czech Republic, these Zuper-Saazer hops, grown locally at Hophead Farms, impart intense and fruity aromas. Combined with the citrus notes of the Crystal hops and the simple malt bill, this beer is crisp, bright and delicious.”

or you could get a Berkeley beer from Fieldwork. A nod to conducting trials outside the lab. Maybe one of their Field Trial beers or their Golden Ruel DIPA.

Los Angeles has actually gotten rain this month. Nowhere near what the Pacific Northwest endured but it is a lot greener on the ground and grey in the skies which makes the press sample that I received from Ninkasi Brewing all the more appropriate. 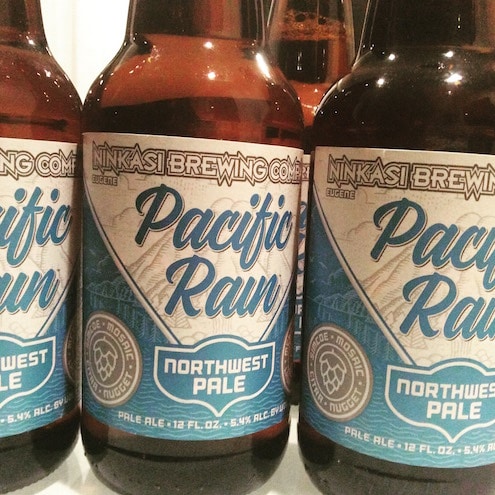 Pacific Rain Pale Ale is brewed with Citra, Simcoe, Mosaic and Nugget hops along with exotic lava-filtered water. At first a little hop bite in the aroma but then the grain takes over. Really malty like almost fully cooked bread. For all the hops advertised on the label, this beer is really quite British in the subtle hop notes. Is it the lava water that is making the difference? The more I drink, the more ESB Pacific Rain is to me. 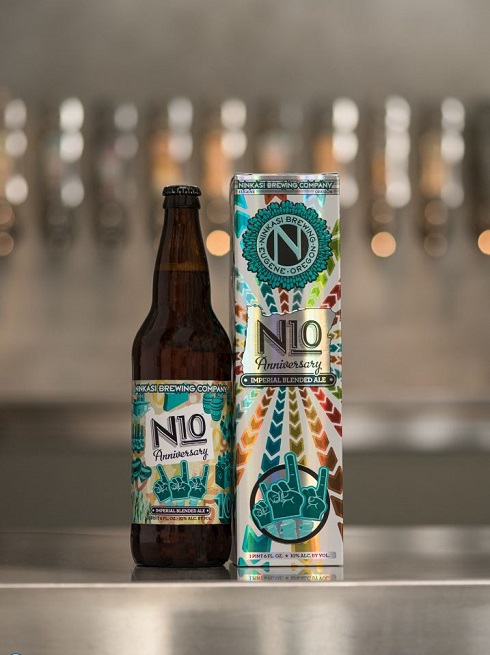 Anniversary beers tend to be big and the cumulative vision of the previous years. Ninkasi certainly follows that blueprint with the release N10, a “commemorative Imperial Blended Ale”.

But then again, having two IPA’s in the mix isn’t the usual template and since IPA is 25% of the mix, this may be a rare beer that you don’t cellar that long.

The final Okto bier review is of the Eugene, Oregon version from Ninkasi Brewing. 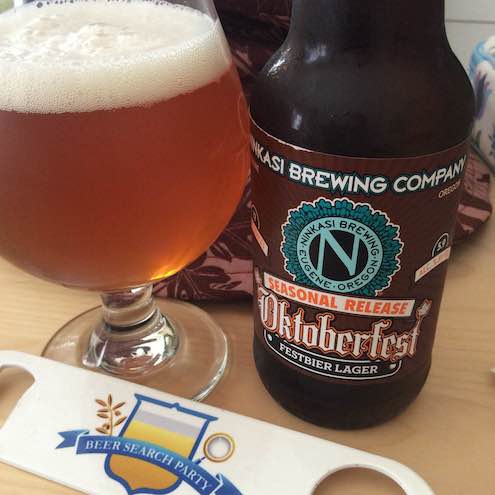 This Oregonian take on the Festbier Lager really starts off quite sharp.  Lot of malt and carbonation really hits the taste buds.  Some metallic/bitter hop notes as well.  Strange (to me) combo of loads of grain/cereal notes combined with a surprising lightness. Also a touch of savory and salt is the lingering taste.  The beer pours a lovely dark orange color with a thin line of foam all around the edge of the glass.  (Yeah, it’s not an OktoGlass).

Of the four FestBiers that I reviewed this month, this is probably my least favored.  The salt kick at the back end really drowns out the malt and kills any sweetness that I expect from this style.  I may have been expecting more since their Prism series of lighter beers have really struck me with their flavor.

Since you would have to go to great distance to get a Devil’s Backbone beer, it was with great anticipation that I saw that they had collaborated with Ninkasi on a beer. 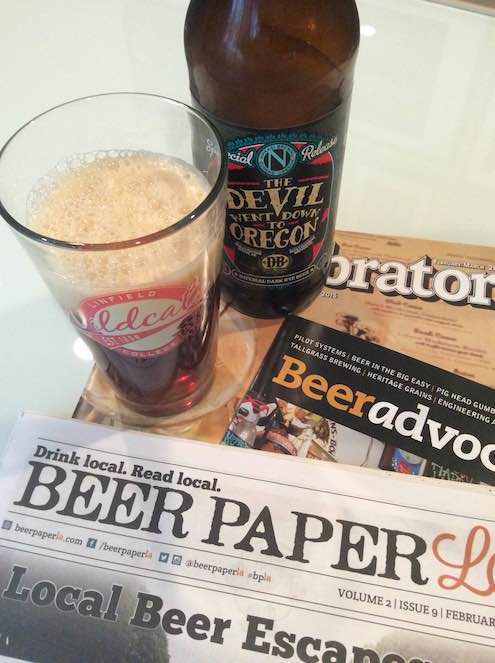 Now let’s see what it tastes like…which is easier said than done. This is an odd duck of a beer. It’s labeled as an imperial rye but only is 7.7%. Maybe that is imperial by rye standards. The aroma is a combo of sawdust and caramel but the taste is quite dry and bitter. There is a tiny bit of candied orange peel bitterness in there as well. The alcohol level does show which is odd for this level of ABV. What gets me is the rye bread note. It makes this really toasty and I don’t quite know if it works as a whole.

I love it when a box of beer comes in the mail.  And when it is stamped Eugene, Oregon, I get more excited ’cause I know it is from Ninkasi. 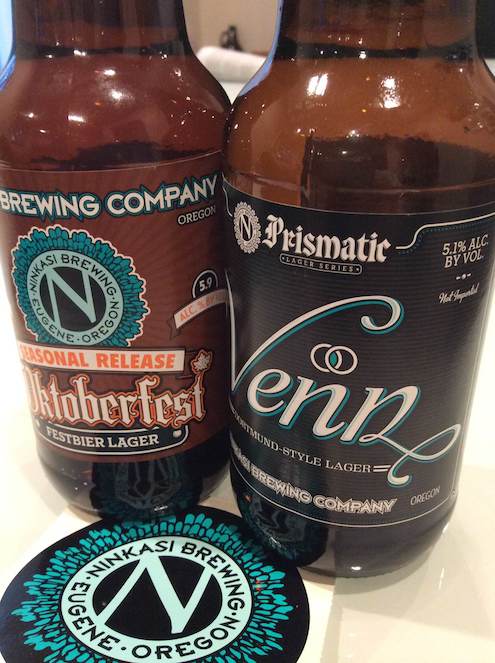 So, which of these two media samples did I like better.  Let’s start with Venn…

…which pours a darkish yellow meeting orange. That smell is the traditional swirl of spice and toast that you get from a clean, well made lager. This is a crisp beer. Not bubbly. Just crisp like biting into a neutral apple. It is strange but I taste a bit of strawberry here. Might just be me. But this is a juicy type of beer. No off flavors. No metallic minerality. Just really strong.

Now onto Oktoberfest in September. This beer pours a lovely orange color. Right off the bat, the aroma screams mineral to me. Again very crisp. Odd to have malt forward beers back to back. I just can’t escape the mineral saltiness that is in every sip. I keep looking at the empty Venn bottle. Not a good sign. There is a skosh hit of citrus in the flavor but it can’t overcome the major taste.

Obviously, this isn’t a toss up. Venn by a country mile.