Take a look at the attributes of these two new (in hop breeding time) from Glacier Hops Ranch.

I posted about Alpenglow already and it is still limited but the words Pina Colada attached to the Ahhhroma (still not sold on that name) hop seem likes one that could really take off. Maybe in a year or two we will see if either become popular.

Old school beer fans can remember how Citra took over in IPA’s back in the day.  But, to me, there hasn’t been another hop with that meteoric of a rise and with staying power since.

This is not to say that the new varietals since are bad, they just haven’t stormed in like Citra.  Mosaic and Simcoe have their fans but also some detractors.  I happen to like Strata and it has gained a good amount of ground but others like Sabro and the newer Talus and Nectaron haven’t really popped yet.

Part of the problem, as we know from our supply chain issues this Christmas, is that this is all about supply and demand.  There has to be enough supply to create the IPA’s and pale ales by, at least, the trendy FOMO breweries but not too much that it becomes a commodity.

Maybe what Stan Hieronymus calls the “new wave” of English hops like Jester and Harlequin will find that right window.

There are many new hops at varying stages of development. Preeminent hop writer Stan Hieronymus fills us in on the as yet named, 074…

074 is USDA 2006009-074, the daughter of an open-pollinated tetraploid Perle plant. Adjectives attached to beers brewed with 074 include orange, lime peel, tropical, floral and stone fruit. As important, I’ve talked to farmers in New York, Michigan and Colorado who are growing 074, basically on an experimental basis, and she thrived in 2021.

Hopsteiner has introduced a newly named hop to the world, “Altus™ is dank with spicy tangerine and herbal, grassy notes.  Booming with high alpha and oil content, Altus™ is the perfect dual-purpose flavor-forward bittering hop and has changed the way we typically look at high alpha varieties. From a Mexican Lager all the way up the pike to a triple IPA, Altus™ can repurpose itself in many recipes for those who dare to explore the creative potentials behind this variety.”

Altus™ is derived “from an Apollo and Wye Target cross.”

Notice that the graphic includes a pepper along with the fruit.  That is where my interest is piqued. Will it add the effects of heat?  Or will it spin as something lighter?  Spicy tangerine are not a pairing I have seen before.

And if any other names are unveiled, I hope they aren’t forced to use the same five letters as Talus and Altus.

As ever, Stan Hieronymus has the hop beat covered and he has unearthed a pair of new hops that you might see in the future. Personally, Akoya sounds the most interesting to me, “Two recently named hops reflect that. Solero, previously known as #243/42, comes from the crafty line and the aroma is described as containing tropical fruits, mango and passion fruit. It is a cross between Cascade and a Hopsteiner male and grown primarily in Germany. Akoya, #99/268, is a cross between Zenith (a 1980s product of the Wye breeding program) and a Hopsteiner male. Its aroma is described as tea, spicy, green fruits and pepper, and it is considered a substitute for Perle or Halltertau Traditon.”

If you do not follow the BeervanaBlog, well, you are missing out. Especially if you want to be up to date on hops. Jeff Alworth has done the legwork on new and slightly new hop varietals so that you can sound so much smarter at the bar.

HERE is the extensive round-up. I am the most intrigued by the English and French hops since especially Endeavour and Barbe Rouge.

From time to time, I try to keep the beer loving public up to date with new up to date regarding new hops that you might be seeing in beers in the future. Two more have come to my attention….

New hops have a long lead time and we usually encounter them in number form first before they get their “trade” name.

Here are some hops that are coming to a beer near you either sooner (but more likely, later)….

Others coming are Country and Jazz (Czech), Godiva (from England), Strata (from Oregon) and Zappa (from Washington).

Thanks to Appellation Beer and their hop updates!

IPA’s will only grow more powerful as the latest crop of hops hit the market in larger quantities. Check out the great post from Jeff Alworth about it HERE.


I am growing to be less of a fan of the slightly lame names being used but of the group cited in the post, these hops and their flavor profiles held the most attraction to me…. 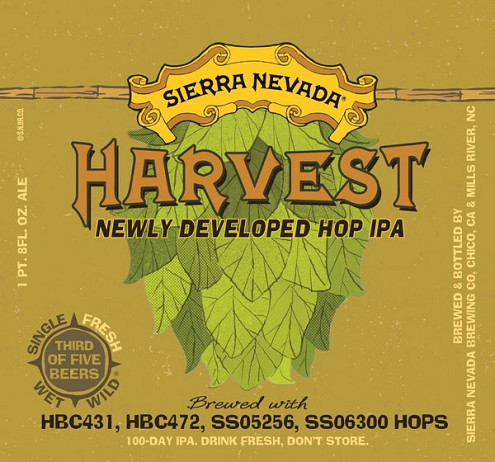 The hop maestros of Chico are not content to “Harvest” Southern Hemisphere hops, Wild hops and now hops with no name with their Sierra Nevada Newly Developed Hop IPA.  And you get the helpful listing of the (4) hops used in what they are also calling a 100-Day IPA.

The flavors that Sierra Nevada extol are quite wide-ranging and frankly, weird: “Complex flavors of cedar, chocolate, coconut, and orange-citrus create an incredibly unique flavor profile perfect for those truly passionate about IPA.”