Current Anderson Valley Brewing CEO Kevin McGee was a garage home brewer and now those recipes will be a sister brand, Healdsburg Beer Company. Blonde, Robust Porter and an IPA are the initial line-up.

This year Anchor Brewing unveiled a re-branding that didn’t pass muster in many people’s opinion and now another heritage NorCal brewery has done it, but I think that most people will be absolutely fine with the Anderson Valley design changes….

I think the antlered bear is playful and Pixar-ish and I like the forested landscape at the bottom of the label. Having chunks of educational material on either side works for me too. The only mid-step (and it is slight) is the font of the brewery name on the blue banner. I think it is a little plain to my eyes.

This refresh along with plans for a destination taproom shows, to me, that this brewery is giving a good effort to change with the times.

President-Elect Biden has appointed people who actually want to combat climate change to positions in his upcoming government and though radical change is probably not in the cards, being at the table is a much better spot.

…an industry whose main ingredients are agricultural probably should be fighting in this arena and I applaud AVBC for taking a stand even if on a label. 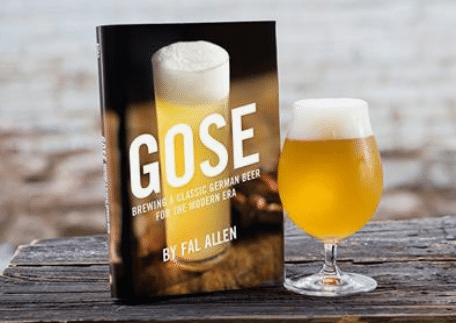 A beer with salt? Yup, and it has a crazy timeline in beer history and now Fal Allen who is reinvigorating the style at Anderson Valley Brewing has written the book on the style and will be leading readers from “Goslar through Halberstadt, Leipzig, across the pond to America, and around the world.” The title? Gose.

I will be looking for this book to fill in the gaps of my education of the beer and the history of this lightly sour wheat beer style. And to see what insight Allen has as to where it might go in the future.

We head to botanicals and lemon/lime for the second featured review of the month. GT Gose from Anderson Valley is a further extension of the Gose brand from the NorCal brewery. 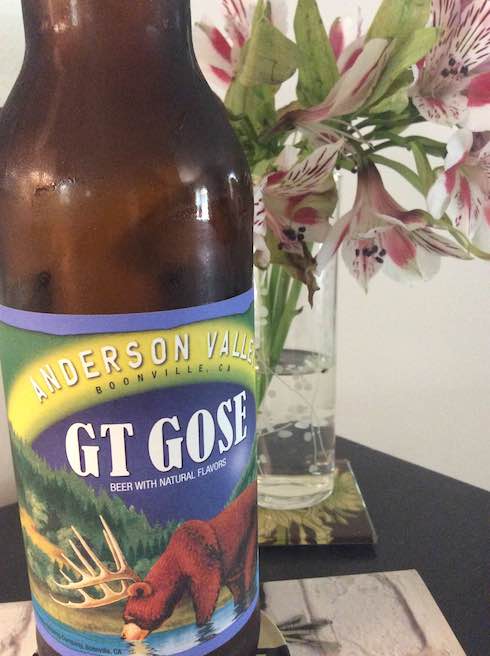 The G&T inspired Gose pours a dark and clear yellow. Lemongrass and lime greet the nose pretty strongly. The flavor is 90% tart lemon. Almost bitingly so followed by grain notes and a barest touch of spice. I am not getting much juniper here though. It isn’t quite lemonade-y because of the botanicals that do show up briefly but I would like to get more to soften the citric assault. This beer sticks to the roof of the mouth and fades into a nice bread taste. I just wish the lemon was dropped a couple notches and the spice revved up a bit more.

Not only does Anderson Valley can their Gose, but they also can a spin-off.  A Blood Orange Gose!  Time to see how the Gose melds with citrus. 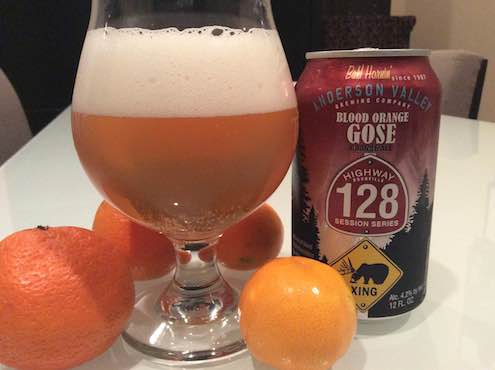 BOG pours a Tang orange color with absolutely zero head to it once the initial foam winds down. There is a certain orange jello aroma to this beer.

The taste has an initial bite to it. A slight tartness that fades into more of that Jello citrus note. Then the beer morphs into a salty drying note. Then a third taste of wheat and cereal pops in at the end. I am not getting the buttery part of blood orange that I really enjoy from the fruit. But this beer does not skimp on orange flavor at all.

But the salinity cuts through it to make this really well balanced.

I am a fan of the Gose style of beer. Unfortunately, American versions tend to include many additions of fruit and/or spices that stray from the original version.

But when I saw a canned version from Anderson Valley, I raised my hopes again that I might find a reliable source of Gose for the summer. 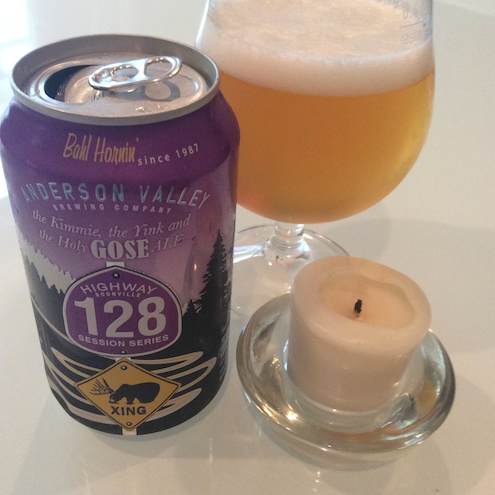 And I was not disappointed. The beers pours a dark orange color with a citrusy aroma. There is another smell in the background that I can’t put my finger on as well. The taste follows with an orange hard candy taste that has a touch of sour to it. This is a very crisp and refreshing beer. And the salt is like a light undercurrent with each sip.

Very similar to a Berliner Weisse but that salt adds just a little kick to the proceedings. I can see myself trying this a few more times during a hot LA summer.