I am ever so slowly draining my cellar of beer and a weekend back, I decided to pull up two beers from Smog City. One from 2014 and one from 2015.

Goldie (2014) pours a deep amber color. This beer lets you know it’s big but not in an aggressive way.  Cheeks aren’t warm but you can feel the effects of the beer. The bourbon character melds with the strong ale equally. Hint of pineapple and caramel.  Slight burn with each sip. A little tiny touch of honey sweetness leads to a dry finish.

Infinite Wishes (2015) Pours dark black but not much head to it. The barrel has left this building. There is some red wine aged notes. Odd that a 2014 strong ale with less ABV in Goldie lasted longer.  This may have turned just past the point of maturation. Getting some cherry notes making it a little bit sour.  Chocolate is the predominant taste.

Up from the Cellar for December will be focusing on multiple vintages of the Anchor Christmas beer. We have arrived at the present day like some Dickensian character. 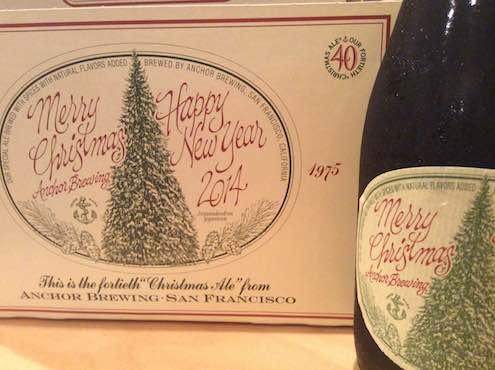 (You can check out last years review HERE)

2014 The new vintage is fairly plain compared with the past. No big spruce or pine notes to it. Not much hops either. It is a simple beer. More liquid bread and in line with a British winter warmer than anything else. It is pretty thick to me. There is almost a fruitcake without the fruit thing going on here. A bit of toffee notes for me as well. Decent. It won’t stop me from buying the 2015 version. But I wish it was more spicy with spruce. It is simply missing something. 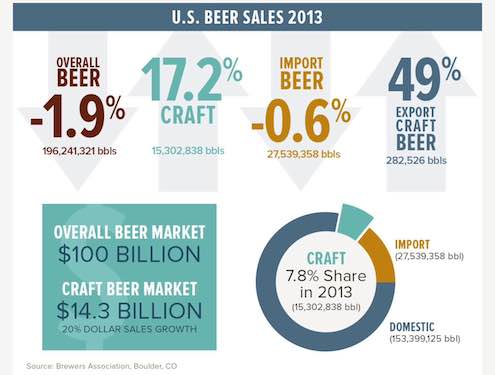 Can the growth sustain at such a high figure as 17%+?

Will the total market for craft expand to 15 billion?

I don’t own a crystal ball so I don’t know what exactly will happen. But upcoming posts on this blog only detail growth and expansion. I believe that if growth is steady above 10% the momentum will continue and 2015 won’t be the year of the “big contraction”.

The name tells you all you need to know.  Which is why it is so long.  This is the 4th of a 5 beer series from Sierra Nevada.  This and the Wild Hop beer being the ones that caught my attention. 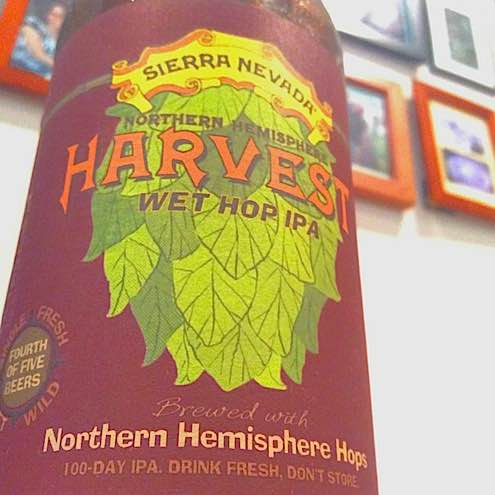 What I liked about the Wet Hop is the simplicity of the ingredients:

That is it.  And boy does it impart flavor.  This IPA is half danky earth and the other half is straight up Orange juice.  It really struck me at first the power of the flavors.  The aroma is reminiscent to me of orange juice that is sitting on the table with breakfast.  I know it sounds weird but that is what was triggered in my mind.

This is a super bitter beer too.  From first sip to aftertaste, there is a vegetal earthiness that just sticks to the palate and will not let go.  This from a beer that was bottled at the end of September.  I can’t imagine the IBU punch on a fresh bottle!  But as much as it is bitter that juice note doesn’t give up either.  I would probably call this a Double IPA taste wise even though the ABV is only at 6.7% 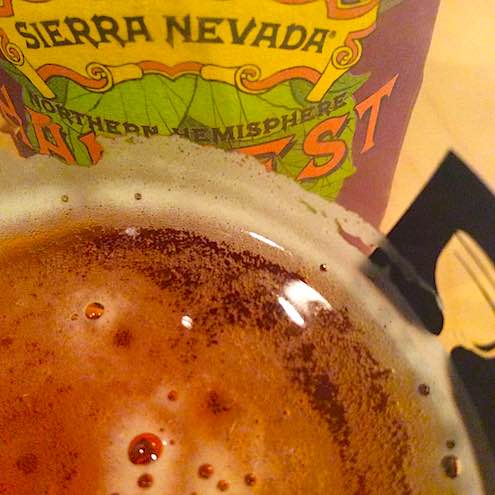 Here in Los Angeles, the weather is finally making tentative steps to fall.  Which means we can begin to drink some lighter stouts and barley wines and wait for any type of moisture to fall from the sky.  These are my 3 picks to drink this month and because the Dark is so dark, the other two selections are quite light.

“Our twist on an American Pale Ale, She Shot First, is brewed with generous amounts of malted wheat, and Pacific North West hops. This particular combination produces enormous flavors and aromas of citrus. “

“Myrtle has a pleasant acidity from a Lactobacillus fermentation. Lemony Meridian hops grown in Silverton, OR enhance the citrus character of our house Lactobacillus strains and the fruity ester profile of our house farmhouse yeast. “

“The Original, a liquid as dark and dense as a black hole. The nose is an intense mix of charred oak, chocolate, vanilla, caramel and smoke. One sip has more flavor than an average case of beer.”

Charlie Papazian, the head man at the Brewers Association must have a sore hand from all the fist bumps and be partially blind from the camera flashes due to a staggering 90 categories in competition at this year’s Great American Beer Festival.

From 20 entrants in the Gluten Free and Dopplebock styles to a mind (and palate blowing) 279 in the American IPA category, there is plenty of data to mine. With special attention to my home state of Oregon and my current state of California.

Here are my take-aways from the medalists:

California racked up double-digit tallys in each medal class and swept the Session and barleywine categories. But in the hoppy arena, lost the premier category of American IPA.

Speaking of, it is so cool to have Breakside win. They are literally down the street from my Mom’s house. It was strange and great to hear your hometown (Milwaukie, OR.) get called out.

Staying hoppy, will Hop 15 from Port become more sought after now that it edged out Pliny the Elder in the re-configured Imperial IPA category. Or will Russian River be considered a pils house with their Silver in the German Pilsener style? Kudos to Firestone Walker for the win with Pivo.

Congratulations also to Gabe and Julian at Beachwood for the gold, silver and more importantly Large Brewpub and Brewer of the year. They are cementing an already sterling reputation while previous GABF darling, Jeff Bagby also snared a medal for his just opened eponymous brewery in Oceanside.

No big LA wins this year since Beachwood is Long Beach and Pabst, is well, Pabst. Though, if I see their gold medal cream ale, Primo, I might give it a whirl.

The other surprise was the strong showing of New Mexico. If my count is correct, the turquoise state nabbed 5 Gold Medals and Marble Brewing of Albuquerque won Small Brewer of the year. Another SW state, Texas also did quite well.

Other strong California statements came from High Water, Figueroa Mountain and Bootlegger’s who all bagged two medals each. With Port Brewing picking up what has almost become a routine amount of medals from their various locations.

Let me finish by saying, that like a list, a competition in craft beer is more important for non-judges as a way to choose where next to go. Taste is subjective and the best Ordinary Bitter may not be to your fancy but if you find yourself in Austin, a Salt Lake City or Green Bay, you now know of three breweries that have wowed judges in that category and that they probably make some other fine beers that you should try.

Hashtag this, my favorite snaps from the beer week that was….

Sierra Nevada Brewing Co. was so last month with their Beer Camp.  I know but they also have a 2nd year ace up their sleeve in the Single, Fresh, Wet & Wild® Harvest Festival on Saturday, October 18, at its brewery in Chico, California.

Close to 50 breweries will bring beer(s) that fit into one of four categories:

Tickets go on sale today and will set you back $75.  But like the Firestone Invitational, this is the type of event that is worth it and is frankly on my bucket list as well. Especially if you are one of the hop fiends out there.

This is big news for Los Angeles, so I will reprint the complete press release:

(I will add my two-cents worth of commentary on Thursday with my Brew& You post over on Food GPS.)

The Los Angeles County Brewers Guild (LABG) has taken the reins of organizing Los Angeles Beer Week to bring you the first-ever LABW hosted by breweries, for beer people. The change comes after LABW’s original committee chairs decided to pass the torch to the fast-growing Guild’s welcoming arms. LABG couldn’t be more thrilled to curate the 10-day event which will launch with a newly revitalized LA Brewers Beer Week Kick-off festival at a new location in Downtown LA on September 20th featuring an invitational-style roster of California breweries and the largest-ever showing of LA beer represented.

“The founders of LABW did a great job creating a structure around which the culture of craft beer was able to grow and flourish over the past five years,” LABG President Jeremy Raub said. “The LA Brewers Guild aims to continue building on that strong foundation, adding more interactive and educational components that will engage and energize the LA beer community.”

The LABG consists of over 20 LA breweries that are committed to craft, community, and culture. LA Beer Week will be entering its sixth year and will feature over 100 events around the greater Los Angeles area. This year’s event will be produced by the Guild’s Events Committee spearheaded by El Segundo Brewing’s Tom Kelley.

“The group of passionate advocates that have held the reins all these years has now entrusted them to the Guild, and we couldn’t be more excited,” said Kelley. “It’s a natural progression for LA Brewers to take over, and we are certainly up to the task of showcasing all the great beer being made in LA County.”

September 25: Meeting of the Guilds (LA/SF/SD) at Mohawk Bend