I have saved up Anchor Christmas beers from 2008 through this year’s version for a special taste test.  Notes below are on each year as it tastes when opened in December of this year.  Followed by a short video of the major tasting…. 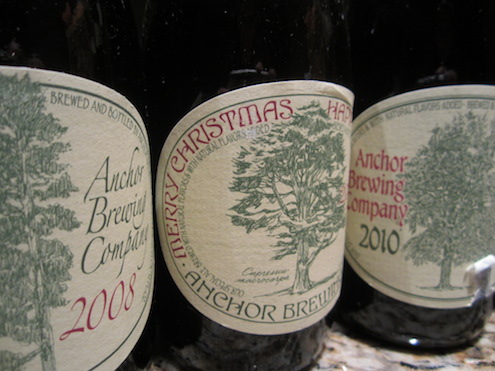 The 2008 has a mixture of a brandy or sherry / soy sauce.  The head really holds up on this one.  Lots of maple syrup and soy sauce in this one.  I fear it’s prime is now way long past.  And yet I still have 1 bottle for next year.

The 2009 is still woodsy.  A touch of spruce is there.  Lighter than the 2008 and a little crisp as well.  Very much like the Steam beer just with age and spruce.

2010 has a lot of cider notes to it.  It reminded me of some English beers that have a touch of that note in the back.  It sticks to the tongue as well. 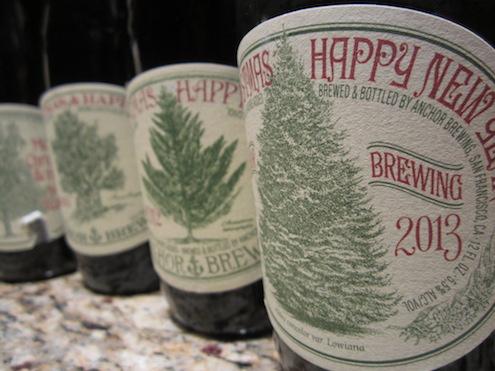 The ’11 is the worst smelling of the bunch.  I get a little bit of tree note but then more cardboard.  It is worse when cold.  As it warms it does get better but it is the least of the bunch.  Has some sour to it as well.  Some light coffee notes in the back.

2012 has more of an espresso head to it.  It is a mix of spruce and caramel.  It is smooth and a little viscous.  A touch of cider to it as well.

2008
Very frothy pour with an espresso head. Aroma hints that this one may have passed prime tasting time. An old ale background with a touch of sour creeping in. Very British ale tasting.

2009
Another frothy beer. Both were stored standing up so I don’t think it was my cellaring technique. But this one had a much lighter head to it. Some minor roast notes and a little whisper of pine. That same sourness and apple cider taste is evident in this one as in 2008.

2010
This one poured better. More Belgian-y. Good sparkle to this one in comparison to the flatter beers form ’08 and ’09. More coffee acidity here. Again the tree and pine notes are only faint and way in the background.

2011
Dark with a brown ale backbone. Not much spice or flavor in the 2011. Even tastes a little thin. If the others did not stand up to aging then I fear for this one.