This is one of the better labels from the brewery which usually traffics in pulp and puns.  It is still too busy by half like most of Paperback’s labels but the throwback artwork works in this context.

Next time the Timbers, Thorns or (poor form) Chelsea play, I will give this beer a whirl.

If I needed another reason to not follow this year’s World Cup past the egregious governance of FIFA, how hot it will be on the pitch and the human rights abuses of host Qatar, well here is the proverbial nail in the coffin…

I am 100% sure this commemoratively cloaked Bud will sell like hotcakes but maybe we should all think about Qatar and their whole alcohol issue where there is “zero tolerance for drinking in public and being drunk in public is a crime. Alcohol is available to buy for over 21-year-olds from licensed hotel restaurants and bars.”

Why would one associate with this country?

We have entered the knock-out phase of the World Cup. Four wins and you can be the champion.

Here are my picks for the winner and what beer you should drink to celebrate! (Some might be harder to find than others) 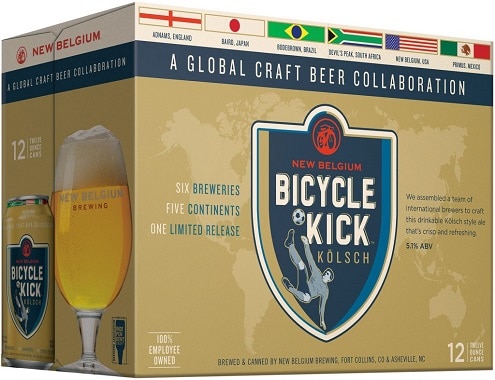 New Belgium is kicking a World Cup collaboration beer into cans in advance of the U.S. absent soccer tournament.

The Colorado brewery has teamed up Adnams (England), Baird (Japan), Bodebrown (Brazil), Devil’s Peak (South Africa) and Primus (Mexico) to create an easy drinking kolsch that includes chamomile (which apparently is the national flower of Russia) and lemongrass, because you can’t add artificial turf to a beer.

The other five breweries will brew and distribute their version of Bicycle Kick in their respective markets. You might have to do some serious traveling to collect them all.

As we get closer to the U.S. vs the Group of Death, I will post up spots where you can catch the action from Brazil. If you are near Atwater Village, you can get some breakfast beer to watch the game with at Link n Hops.

Starting June 12th, we’ll be opening at 8:30 am to show the FIFA games for the World Cup!

Anyone up for a beer & pancakes to start the day?

Brazil is the host of the World Cup which runs from June 12 through July 13.  And since Brazilian Craft beer isn’t super available here in LA.  You may have to choose a Group of Death themed viewing party at the German restaurant and beer garden, Wirtshaus.

As they declare in a recent press release, “In support of Wirtshaus’ owners’ now-dual heritage, Wirtshaus will be airing all U.S. and Germany matches in the group stage of the World Cup, and all games after, in the elimination rounds.

Their will be plenty of TV screens to watch the games and they will open early on game-days.  Plus they will offer “a soccer skills contest – known in Germany as the goal-scoring game, “Torwand”. Contestants who make six of six consecutive shots, will win a free boot of Erdinger beer.” Erdinger being the sponsor of the festivities.

Since I am a World Cup fan, I will be posting more viewing and craft beer locations as they become available.

I love the World Cup.  Yes it is as corrupt (if not more) than the Olympics (which I hate) but the game is on the pitch.  No heartwarming stories.  No cutting away to curling or synchronized swimming.  You get world class soccer. And no Bob Costas and his pink eye.

And now there is a beer for the occasion (if you are fond of AB) Brahma Selecao Especial which uses barley grown on the pitch of the Granja Comar training centre. Home of the Brazilian National team!

Normally, the barley would get beat to shit by soccer cleats and bouncing balls but the grounds were being renovated and while that was going on the ground was put to an extra use not normally associated with the Beautiful Game.

I am sure that it won’t taste good so I am glad it probably won’t show up in the states.  I am sure that I can find some beer to drink while watching the US team play in the Group of Death.

(Special thanks to Erika Taylor for pointing this out to me)

Finally, the world will get a new champion of soccer!

Will Holland finally break the curse and finish off Spain?

Or will Spain continue it’s dominance of possesion and wear down the Oranje?

To finish the 2010 World Cup, we return to South Africa for our final beer from the Shongweni Brewery.

Here is the info from the website about the Durban Pale Ale, “Durban Pale Ale was inspired by the original IPA’s produced in Britian and then shipped to India for consumption by the soldiers and bureaucrats. The IPA came via the Cape and records show that some of that beer made its way to the British serving in South Africa. With Durban then, as now, a major shipping port it is hard not to believe that barrels of IPA were happily consumed here on the East Coast so we wanted to revive an old tradition.

We only use the best malts for our Pale Ale, and in order to achieve our 5.7% ABV we need to pack the mash tun full of grains. The beer is also packed full of hops to achieve the 45 units of bitterness that we want. We use Cascade hops since they provide the bitterness we want but don’t leave any lingering harshness on the palate. The inclusion of Challenger hops provide the crisp, fruity characteristic of the beer, which is complimented by the special strain of English ale yeast that we use to ferment the beer.

In the glass the beer is a light caramel colour, with an immediate blast of rich orange on the nose, a toffee character and just a hint of spice from the cascade hops. On the palate it is medium- to full-bodied, and the initial sweetness from the sheer amount of barley in this beer is balanced with solid and tangy hops and a gentle fruitiness with a dry after-taste.

Our Durban Pale Ale is a strong beer and we have found that its character will mature over time if cellared producing a complex ale that will reward the patient drinker.”

The game for 3rd place. This will either be a cracker of a game because there is no pressure or all the stars will be on the bench as the rookies get a taste of World Cup action.

And it is a match for past cup winners as well!

So we head to Uruguay for the penultimate beer of the 2010 World Cup!

And we toast the fighting spirit of the Uruguayan squad with Dorada from Mastra…”A moderately strong English Ale. The balance is almost even between malt and hops, or sometimes to the bitterness. The easy thing to drink is essential in this style. Emphasizes the use of hop bitterness, as opposed to the aggressive middle and end hopping is seen in American ales.

At the beginning of the tournament, Spain would have been the heavy favorite in this match up. But now. All the momentum is with goal scoring Germany. So to be contrary. Here is a light beer from Spain for your pleasure. 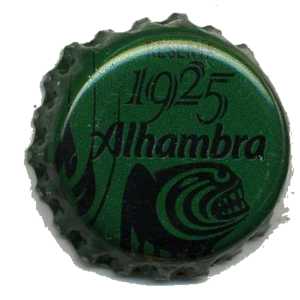 “Reserved for the most demanding palate. Alhambra Reserva 1925 is a high quality beer crafted to perfection. With its deep, exquisite taste and exclusive masterpiece in bottle design. Reserva 1925: Our vast brewing experience, to enchant the beer connoisseur.”