Pilsner by Tom Acitelli roams all over the world. Fitting since the style has too.

This book is formatted with bite size chapters that are super easy to blitz through which is both good and bad. The good is that you are quickly propelled through history. The bad is that each chapter seems to be missing an opportunity to deep dive into a historical character or a moment in time.

I guess that I wanted a book three times the size because Acitelli is a really good writer and I wanted the book to keep going but it arrived at the finish line too soon.

Tom Acitelli has been kinda quietly amassing a nice historical archive over on the All About Beer website.

From Michael Jackson, to beer tastings of the past to a discussion of cream ale, the topics vary but touch upon integral points in beer history.

Check it out to up your beer education game. 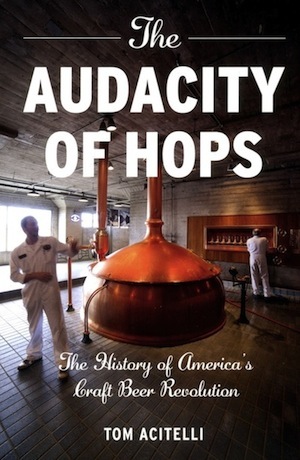 Tom Acitell’s book The Audacity of Hops, takes on the uneviable task of tying together all the strands of craft beer history into a cogent and linear whole.  And it succeeds.  This history starts in the wastelands of beer and re-acquaints us with Jack McAulliffe and New Albion Brewery.  It shows  us the humble beginnings of the Great American Beer Festival and the Brewer’s Association and makes quick dips into how some of our favorite breweries got started like Sierra Nevada, Dogfish Head and Brooklyn Brewery.

The journey goes from 1972 up to pretty recent happenings as well .  The key takeaway for me was how hard it was to get this ball rolling.  Bank loans were non-existent and no Kickstarter either.  Blogging and the internet was in its infancy so word just could not be spread like it is today.  Suppliers of ingredients and equipment were not there to buy from whereas now there is an infrastructure.  And most importantly, the market for these beers was uneducated and dulled by years of watered down beers backed by ad campaigns.

Some locales and breweries get short shrift but that may have been simply to keep the book at a reasonable length because even giving cursory mention to more would have ballooned the size.

I am hoping that Acitelli will re-embark on another chapter in 5 or 10 years to really dig into what happened between 2006 and 2013 because I want to read his perspective on how all these brewers and beer geeks are faring.