Unlike some, I like a good barleywine now and again and if it is from The Lost Abbey, you can double that emotion. But even more appealing is the idea forwarded by the Abbey of a “contemplative pause”. Good idea for all beers but even better for this beer style.

It is always good to get a box of beer in the mail and in these times of unopened taprooms, it is a safer way to get your beer to you and then if you want something that not everyone can get? Well then you really should take a look at the Rare Beer Club. The two beers that I received came with a full story on the brewery and the beer as well as an extra tidbit of info on beer in general. And for the beers, if the photo did not pique your interest, maybe the reviews below will.

17 – Pours a jet black color with dark brown bubbles around the rim. The mint is shy at first but as the beer warms really dials up. Chocolate lies underneath the mint as a subtle counterpoint. It really tastes like a mint chip ice cream even without any lactose.

Righteous Son – I want to say sweetness at first but the better word pairing is rustic caramel.  There is a slight bourbon undertone but instead of being a featured performer it is more background. There is a pleasant mustiness here. English meets restrained America. Aroma has a leather quality to it.  A Sunday sipper.

Not Doctor Who / Torchwood Cardiff but California Cardiff by the Sea is where the Lost Abbey has set down their 2nd location. And it is called…. 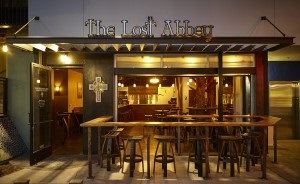 …the Confessional. It is located in the Seaside Marketplace and will feature beers from (obviously) The Lost Abbey, Port Brewing and The Hop Concept. You will be able to try tasters, purchase pints and grab growler fills as well as bottle sales to-go. The Confessional will have 24 taps and a wide array of beers from the three brands and they are open starting at 11am Monday through Sunday.