That is right! Groundbreaker LA brewery, Eagle Rock has turned 11 and has fun in store for us in March. But in the meantime, how about buying this throwback treat….

“It’s been a while since we had all four of our core beers packaged together, but we’re back baby! These beers were some of the first beer brewed at ERB and were available year-round for our first 5 years in existence. These beers were chosen to start our brewery because they each showcase a major brewing ingredient, and each represents a category of flavor in beer: Solidarity with Malt, Populist with Hops, Manifesto with Yeast, and Revolution with balance.” 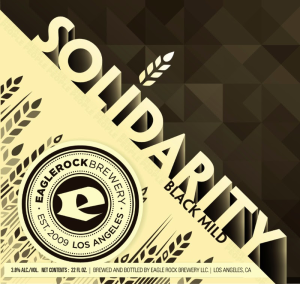 Say it ain’t so! Here is what Eagle Rock Brewery has to say about a landmark L.A. beer: “Our dear old friend Solidarity is going into semi-retirement…. By that, I mean that it’ll be brewed only seasonally from now on. So it’s not “farewell”, but a “see you later”. To send Solidarity off, we’re having an all-things-Solidarity party. Join us in tasting through ALL the versions of Solidarity that we’ve released in the past years (vanilla, deuce, bourbon barrel aged, etc., etc.). It seems only appropriate to have the party on the anniversary of the first batch of Solidarity (and in fact the first beer we ever brewed in this facility), so we’ll be having an epic send-off on 11/14/2015, six years after the first release of this beer.”

Solidarity ranks up there with Craftsman 1903 lager and Strand Brewing 24th Street Pale as the beers that launched the beer scene here. Hopefully you can stand with Solidarity as it goes to seasonal status.

From the past of mild we return to the future with Eagle Rock Brewery and Solidarity mild….

“‘Mild’ refers to an English-style beer that is malt-accented yet light bodied and low in alcohol. Depite it’s dark appearance Solidarity Black Mild is light bodied and refreshingly drinkable. A variety of roasted malts lend toasty, nutty flavors and complexity, with subtle notes of coffee, dark chocolate, and a hint of smoke. Pull up a seat and have another round with your best mates!”

Last month, I picked up a box of spring seasonal’s from Pyramid Brewing.

This month, I took my $20 to Sunset Beer Co. and picked up Solidarity, the beer from Eagle Rock that really made their name in the beginning. 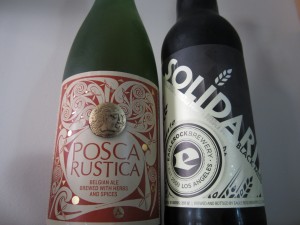 Then I picked up a Dupont beer by the name of Posca Rustica that I had seen in many mouth watering e-mails from Vanberg & Dewulf who brings them to the U.S. I am curious about it because part of the description said “odiferous”.