Hi-Wire Brewing wants us to be both elated and bitter…

“A balanced and hoppy ale perfect for snuggling up in front of the fire or getting outside on a snowy day. Celebrate the season with an India Pale Ale that doesn’t lack for pine and citrus peel notes from Michigan Chinook & Idaho 7 hops balanced by sticky caramel and toasted bread flavors from a carefully crafted malt bill.”

In a Brewing label world that likes to steal intellectual property, it is good to see a brewery be clever and respectful while also using the word tripel as a pun. Great Lakes Brewing Co. not only goes Belgian instead of IPA but graces the label with the havoc causing Bumpuss pack of canines.

Rounding out our trio of Winter beers is a lager filled with Carolina grown malt. The maltsters are name checked on the label of Winter Bock from Hi-Wire Brewing. 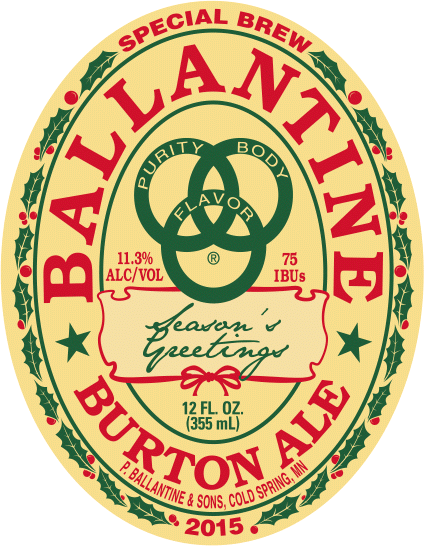 A bit of history with today’s Seasons Greeting from the Ballantine’s Brewery.

“Brewed especially for: with that person’s name appearing on the label festooned with Christmas holly and wreaths and the words: Seasons Greetings from all of us at Ballantine. Ballantine Burton Ale was brewed in limited batches from the 1920’s-1950’s once a year on May 12th, and was then aged in huge oak tanks at the brewery. Vintages of Burton Ale could spend anywhere from 7 to 20 years in oak, before being bottled, and then given away by the brewery as gifts. Ballantine Burton Ale was brewed to be a high gravity, high alcohol beer, coming in at about 10-11% abv. Ballantine, who produced its own hop oils, used lavish amounts in this beer as well, to preserve it, and the high hopping, put Burton Ale at 60+ IBU (bitterness units). It was sedimented with yeast, making it a bottle conditioned beer, so further fermentation, and development could take place in the bottle.”