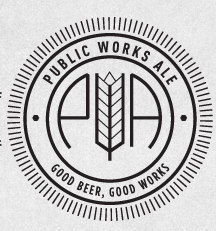 Public Works Ale is our final stop in Maryland. And it is sitting atop a piece of Baltimore Oriole history.  Their home, until 1944.  And they give 1% of their sales to job training in the community. Because, if a person finds a job, they might spend their money on beer.  Your beer.  Smart thinking.  But we are here to talk beers.  Specifically which beers that I would have in my taster tray….

Well there are three mainstays,  the Knuckle Buster IPA, Red Cent Amber and the Fair Shake APA for starters.  And that is it (for now),  So have your beers then walk around Johns Hopkins and the Baltimore Art Museum which are nearby.