I am always on the lookout for beer video/films/documentaries and I think I found a good one in Pints. Just the fact that they start with episode 1 being about Terminal Gravity Brewing is great. This will hopefully make for a good learning experience.

Yesterday was a big day at the yellow building at Golden Road Brewery. Not only were the cans ready to be sold and taken back home to ‘fridges across the southland but four new beers made their debut yesterday.

But back to Canlandia for a moment. 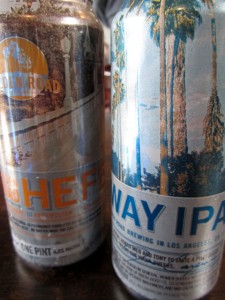 These are really well designed. The first and most important part is that they hold a full 16ozs. You are getting your full pint. Second, these have a lovely design that really says Los Angeles on it in a James Cain’s “Paradise” sort of way. Wistful and evocative of an earlier time in L.A. And I love the personal note from Jon on each can. 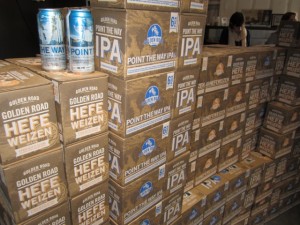 I am a sucker for a well designed label and these are great but it wouldn’t matter all that much and I certainly wouldn’t blog about it if the beer inside wasn’t worthy of it. It is. Point the Way is a great session IPA that doesn’t over bitter the senses and still makes room for a strong malt taste. I heathenly had one straight out of the can and it tasted great. Nice and fresh. The hefeweizen is strong too. Especially on the banana flavor side. You can get both at the brewery or later this month at Whole Foods down here.

On to the new. There was a wide spectrum of styles unveiled. The oft-overlooked brown ale was represented by Get Up Off that Brown and there was an alternate world IPA called Lost its Way. Both of which I will have to sample another day because I went with the cheekily named Either Side of the Hill Strong Ale and the El Hefe Anejo. 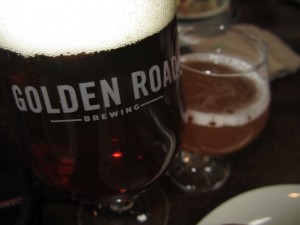 Either Side is like the hefeweizen in that it is very much on point style wise. It was strong with a raisin, plum and candi sugar swirl of flavors. And like the other Golden Road brews, isn’t at all harsh. Very controlled. A nice winter warmer. The El Hefe sounds like a weird idea. Put Hefeweizen into a tequila barrel. But it works. You get a strong vanilla flavor at first that blends into a banana taste. And then there is a hint of spice at the far back. It did not remind me of tequila but it was extremely tasty.

Thanks to Meg, Jon and Tony for throwing a great introductory party for the tallboys!