I like blended beers because it is such an art meets science moment.

Mixing two strong fruit flavors in the process just adds difficulty. But if anybody can pull it off, Ommegang can. Plus it is in a 12oz can, which is a great serving size for a tart beer.

When Ommegang teamed with HBO and Game of Thrones for Westerosi ales, I thought of it as a cool novelty and I was excited about the first few releases and even went to a few GoT themed beer events.

But instead of one beer per TV season, the line grew and I could not really keep up and you may have noticed that I haven’t even posted about what appears to be the final beer in a fancy large format bottle.

For the Throne is a beer/wine hybrid with Champagne yeast that sounds like a fun, experimental beer. One that I will probably pick up when I binge the final six episodes later this year.

Ommegang has handled this tie-in admirably from a beer standpoint and it got me to thinking, what is the next franchise (Movie or TV) that will have such a long and fruitful relationship. Avengers as a franchise is still going but is geared more to teenage boys and comic book geeks. The Rising Skywalkers is one movie from completion with hesitant spin-offs. Hellboy might make a leap but that is even more of a niche than GoT.

I do think that we will not see the like of the Ommegang Throne beers anytime soon though.

Next up for the holiday is Adoration from Ommegang … 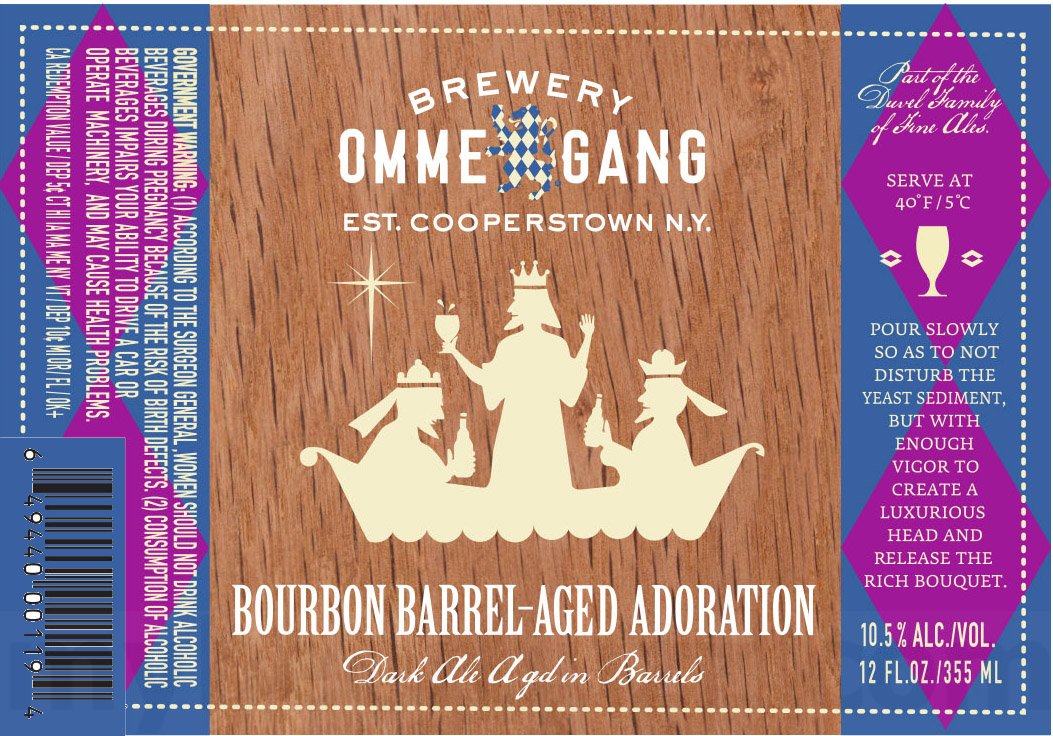 Take their Dark ale and then barrel age it and then open on Christmas to relax.

Ommegang (much like their NE brethren, Allagash) continue to expand upon their strengths. This time Ommegang is combining Brettanomyces with fruit, hops on top of their witbier.

The beer is called, Fruittanomyces (try to spell check that) and it “is brewed with malted and unmalted wheat and oat flakes and is spiced with sweet orange peel and coriander. The beer is fermented with mango, kiwi, and passion fruit juices and dry-hopped with Citra and Cascade hops before aging in the bottle with Brettanomyces.”

Seems like Ommegang is more prolific than George R.R.R.R.R Martin as well as yet another beer is on the way for the Mother of Dragons…. 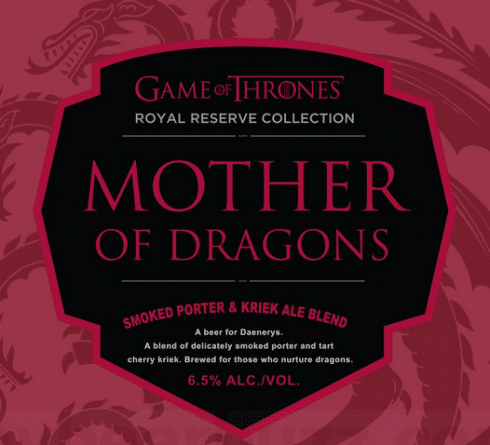 This blend actually is the most interesting choice (though somewhat obvious) of the recent releases. 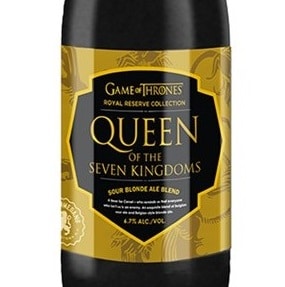 When Game of Thrones isn’t on, I tend to pass on the related beers from Ommegang. I am certainly not going to drink them while watching Westworld.

But the beer name might suggest to those looking for any clues that a woman would ascend the Iron Throne.

Queen of the Seven Kingdoms, “the second of four special beers in this year’s Game of Thrones-inspired Royal Reserve Collection. Inspired by Cersei Lannister, this exceptional blend of Belgian sour ale and Belgian-style blonde ale.”

Now I need to get bottle 1 and 2 and cellar them until the show returns. 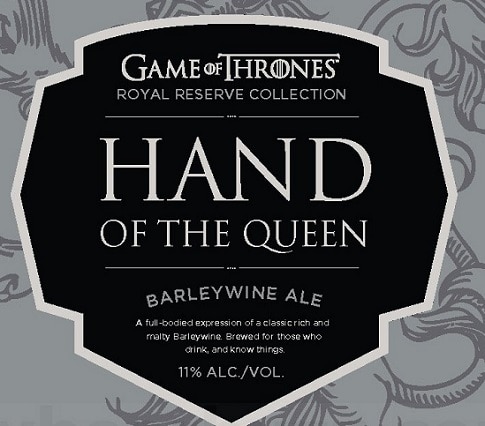 As we close in on the close of the series for Game of Thrones has Ommegang tipped their hand a bit? (sorry, horrible word choice). Will a Queen rule the Seven Kingdoms? Either way, I am glad to see a barleywine for the next GoT beer. It makes a nice change of pace from previous entrants. 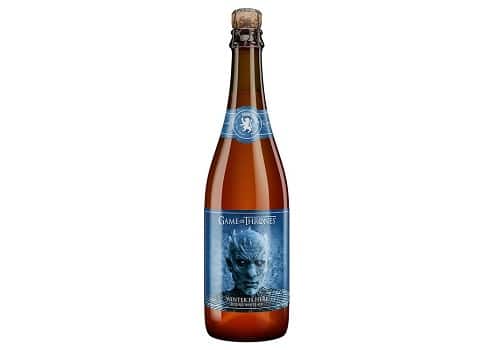 Winter is Here, an imperial white ale bearing the sullen visage of the White Walker leader and his snazzy hair style.

I admit that I missed the last release. None of the beers have been super-duper to me, though to be fair, would probably go over well in Westeros. 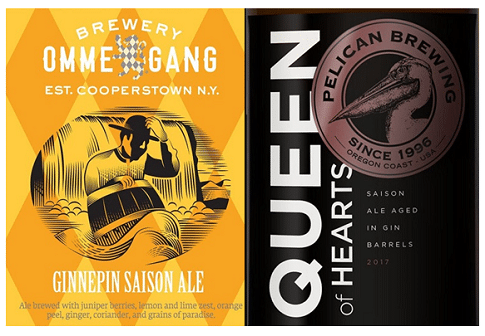 Trend forecasting is dicey. Did anyone see hazy IPAs coming in early 2016? I didn’t. But I will plant a prediction flag with gin barrels. I think gin influenced beers are going to follow a similar trajectory as pilsners. Slow and steady out of the niche styles not a tier below bourbon barrel aged beers. Don’t believe me? The labels above from Pelican and Ommegang tell me it could happen.

This month we focus on sours from established breweries. Sometimes chasing new leads us to forget the classics. Well, and one new beer but from a classic brewery.

~LIGHT
Firestone Walker Barrelworks/ Bretta Rose5.3% ABV
“Thirty miles north of Barrelworks lies the fertile Santa Maria Valley. Its warm days and cool marine layer-fed evenings allow for a cornucopia of fruits and vegetables to be grown in its rich soil. One of Santa Maria’s crown jewels is locally grown raspberries. We jumped at the opportunity to ferment fresh local raspberries with one of our Barrelworks creations. Behold Bretta Rosé! A low-alcohol Berliner Weisse style ale, acidified and matured in French oak puncheons for 6 months, is the foundation for this gem. Add 1000 lbs. of fresh raspberries, allow a secondary wild fermentation for 4 more months and voila (!), we have a crisp effervescent concoction, bursting with raspberry perfume and flavor, a rosé color, bracing acidity, and a clean and refreshing finish.”

~MEDIUM
Ommegang/ Pale Sour6.9% ABV
“Pale Sour is an elegant, drinkable sour beer, unique in that it’s not wood-aged. It has a well-balanced blend of sweet and sour. Liefmans is such a historic, iconic brewery and having the opportunity to work with them has been an honor and very enjoyable. Pale Sour begins with a mixed culture fermentation in open copper vats. Aged over several months in stainless tanks, master blenders blend new batches with older ones until the optimal balance of flavors is reached.”

~DARK
New Belgium/ La Folie7.0% ABV
“La Folie, French for “the folly,” is a beer steeped in New Belgium brewing tradition. This wood-aged, sour brown spends one to three years in big, oak barrels, known as foeders. And when the beer finally hits the glass, La Folie is sharp and sour, full of green apple, cherry, and plum-skin notes. Pouring a deep mahogany, the mouthfeel will get you puckering while the smooth finish will get you smiling. Not a beer for the timid, La Folie is a sour delight that will turn your tongue on its head. Find out why it’s considered one of the best sour beers around. “