A month of two back, I had the St. Bernardus ABT 12 and it was solid as ever, now I learn that a sour version is on the way. I will have to research to see if this is just new to us or new in amount being made or sold but either way, I hope to see this on store shelves. Hopefully in a smaller format bottle.

In the post, aftermath of CBC 2017, I saw this tweet go by and I thought it relevant….

And I fully agree that the first two have nothing to do with how good a beer is at all. And those two dastardly words need to be demoted behind many others in the craft beer lexicon because they are the primary power behind the whale hunting/empty chairs in line phenomenon that has too much undue influence in this day and age. New and rare seem to inextricably linked with waiting and snobbery.

I will argue though that local does have an effect on how good a beer is. Depending upon whether you are actually drinking the local beer locally. If I am at a local brewery and they just tapped a keg, that beer (depending on if it is a good beer to begin with) will be better simply because of freshness.

And local doesn’t add to the weird waiting in line, then Flip that Beer strata of beer society. A super rare, new brown ale just ain’t gonna cause a stir because, in actuality, those three words are a secret code to the Whale Bro’z who are chasing primarily for the sake of chasing. I would love to see an experiment where a hazy NE style IPA from say a random brewery in Wisconsin was put into a can that said Trillium or Monkish and see how many people A) drank the beer and could tell it was not from the labeled brewery B) actually drank the beer and didn’t trade it.

Does that mean that I will avoid anything that is new, rare and local. No. That would be the opposite pole of those who only drink what is new, rare and local. What I don’t do much anymore is hunt. I have a list of beers that I want to try but only if I see them at the places that I normally stop at. When I find something from the list, I get the same thrill and eagerness to open that I always have without scouring message boards or putting miles on the car.

New is fine. Craft beer needs to explore new avenues and side streets. Rare is fine. One-off beers show in stark relief what Macro beer does not want to do economically speaking. Local is great. Creating community is one of the key strengths of craft beer. But they are not the end all, be all any more than a brown ale is.

The beers of El Segundo Brewing were always the draw but I couldn’t help but notice that the label design had a huge hole in the middle where a little photo or graphic seemed swallowed up.  The labels were fine but the only one that really “popped” was the autumnal Smoky Hollow beer and the ghostly bagpiper with 3d smoke.  Well, now it is different.  Now they all pop. 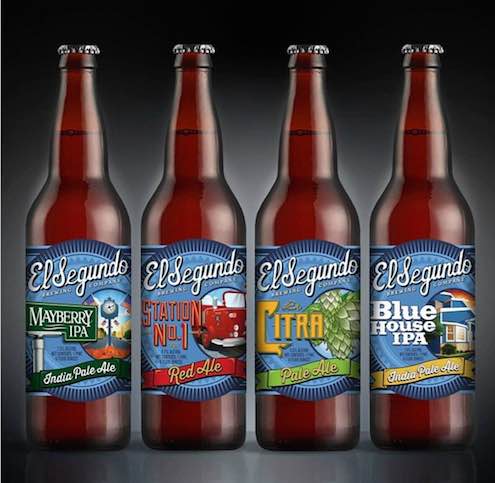 Now both the name and the image are there front and center.  Plus the name font and the beer style font match and pull the eye in.  Plus the color really makes these shelf eye catching compared to the blue and black of before.  Now the outside looks as good as what is inside.

And they have teamed up with Inside the Cellar for Freshies Club. Want fresh Mayberry but can’t brave the traffic to pick up a growler? Then get it home delivered. Much better than the alternative……

I saw this on the fabulous Brookston Beer Bulletin site. Jay Brooks writes,“Currently there are seven Trappist monastery breweries authorized to use the “Authentic Trappist Product” label by the International Trappist Association. Six are in Belgium, one is in the Netherlands. It looks like an 8th monastery is applying for authorization to brew beer under the official designation. The monastery of Engelszell Stift has filed an application and expects to be notified of the ITAs decision in 4-5 weeks.

According to Trappist-Beers.com, the Engelszell Stift monastery was “founded in 1293 and needs financial input to recover the old paintings, fresco’s and paintings” and has decided to start a small brewery to raise the necessary funds. It is located a little over 120 miles from Munich in Austria. According to Wikipedia, it’s the only one in Austria and is located in the northwest part of the country known as the Innviertel.”

I wonder how the whole application process is for this designation? Are there check-ups from inspectors? A letter grade like restaurants in California? And most importantly will this open the floodgates to more?

In tiny Joseph, Oregon you can get good food and some local beer from Mutiny. (insert your joke here about brewing up a mutiny) 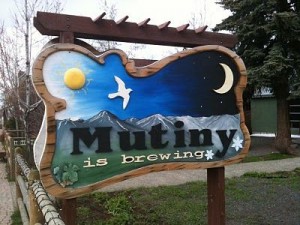 And what is super great is that the brewer is Kari Gjerdingen a graduate of UC Davis and Terminal Gravity. Eastern Oregon is big on women brewers it seems.

She has started with a wheat beer and a porter. And from the blogs and websites I looked at, the food is tasty too.

Greg Beron and Kevin Koenig part of the driving force of the famed Culver City Home Brew Club are creating a new outpost in Eagle Rock. Going eastside is great for me. Now I can have a local home brew shop!

Consider this a heads-up.

This is a Canadian nano-brewery. You can check out their current beers on their Facebook page. As I type this they have Revenge of the Pine Pale, McHugh’s Stout, and Nut Brown available.