For the mega-brew merger to go forward, along with divesting certain properties, it looks like the Federal Government also added some much needed assistance for smaller brewers. Whether it will be enough is another question.

1. The “Voluntary” AB Incentive for Performance plan is now shelved. This plan incentivized distributors who shut out brands that ABInBev did not want competing. The Department of Justice, in the settlement, wrote that it “prohibits ABI from instituting or continuing practices and programs that disincentivize distributors from selling and promoting the beers of ABI’s high-end and other rivals.”

2. Buying distributors is now capped as well. With ABInBev owning somewhere in the neighborhood of 7%, they will be barred from going over 10%. Which they more than likely will do.
Rest assured that the Brewers Association will be closely monitoring the situation. The group has been opposed to the merger of ABInBev with SABMiller from the get-go but, at least, there was some help given by the DOJ.

I have been of the opinion that if any of the industrial foreign owned breweries wanted to buy up little craft ones that it was sad to me personally but also part of the evolution into a new world of craft beer business. They could buy a brewery a month for years and not dent the overall numbers.

What I was worried about was that the beer that I wanted could be blocked from shelves or poorly handled by a distributor who was beholden to ABInBev or SABMiller. That blockage could seriously hamper the growth of a brewery.

Now we will see how well the rules are followed. 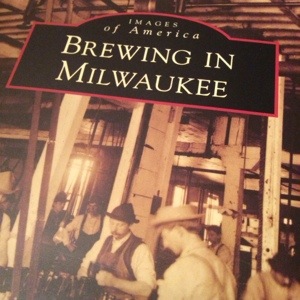 Brewing in Milwaukee is part of the Images of America series from Arcadia Books. In a nutshell (or mash tun) it is a set of old-time photographs with a little accompanying text before each chapter detailing the history of Brewing in Milwaukee Wisconsin.

Another way to look at it is like an exhibit at a local history museum.  As with the Yuengling book that I reviewed earlier.  I loved the photographs and I just wish there had been more text or a timeline or something to accompany it.  That is probably more a reflection of my greedy nature.

But here is what I took away from this addition to the historical beer canon….

– fire was always a menace to these breweries. No OSHA apparently.
– there was a Weissbier brewery by the name of Gipfel
– beer deliver in winter was perilous
– seems like the beer barons married into the business
– lots of clay bottles used back then
– wish some of these old buildings could have been repurposed, not razed
– Schlitz was 8 city blocks big!

And much more. If you are a fan of beer history this is great stuff about a brewing city that is not talked about much anymore sadly. 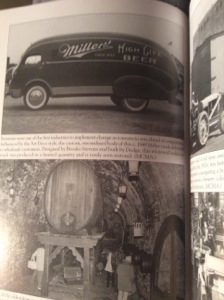 … I walk into my local grocery store (o.k. it was Ralphs). On the way in, a couple is leaving and they are carrying (together) their beer for the party. I look down. Miller Lite. I cringe. Hopefully they did not see me make the “I am about to throw up face”. Then to add insult to injury. The person checking out before me has a case of Landshark Lager. In CLEAR BOTTLES!!!

When I get my business cards made, I may have to start handing them out to the clueless among us.

This is why I started this blog. People my age and younger should know better. No one eats Hot Pockets or pre-sliced cheese and likes it. So why do the same with beer?

Not to get all philosophical but we all need to honor the time we have on this earth. Don’t buy a McCafe latte when your local roastery can make you something out of this world. Go to your Farmer’s markets. Buy the organic meat. It may take more time and it WILL cost more money but I would rather have one FANTASTIC beer with a great hormone free burger than a case of MGD and a whopper.

Wherever you are there is a brewery that is local and trying HARD to make a great pint. Drive that extra mile and get it. Don’t be the lazy, Landshark guy!