Late January and early February are Triple IPA time. And Long Beach Beer Lab has a TIPA that seems familiar…

Perhaps it is time to do a TIPA taste off.

Instead of posting about another too early Oktoberfest beer, let’s talk Oatmeal Stout.

Long Beach Beer Lab has a little something new out now for those looking for something both filling and flavorful but not heavy.

Time to check in on the best beers that I had this month. First off is Pally Pils from Green Cheek in Anaheim, I went to try their cold IPA but was taken by their Italian Pilsner instead. Then traveling to Belgium via El Segundo, the noted IPA house has a Belgian Strong Ale, Gouden Arm which was strong indeed and just an excellent departure for the brewery.

But the winner was the collaboration between Long Beach Beer Lab and Ambitious Ales called Affogat-oats. A triple IPA with oats and lactose and coffee. I would have added it to my IPA best but it was such a style mash -up. Coffee and cream and then sweetness and a touch of bitterness

Two beers that Three Weavers made almost cracked the top three of the IPA list. The latest batch of Light Trails was bright and grape-y and the Crowns and Knots collab with Crowns & Hops was winner was well. The top remains unchanged.

Long Beach Beer Lab and Ambitious Ales are only separated by a mile or two and now they are even closer on the label for a new beer that is A) hazy B) over 10% and C) made with oat cream.

So more latte than coffee IPA it seems.

PS – I recently opened a can and it is fantastic. Big coffee. Big latte and still the hops show through too. Pick one up.

A lot of space on this blog is devoted to grand openings and second (third) locations for local breweries but equally important are images like the one above. Long Beach Beer Lab recently unloaded a new Brewhouse into their growing space on Willow Street.

According to the brewery this upgrade means they can brew “at a capacity we’ll beyond what we have been. This will allow for more beer, more variety of beers and an even higher quality product for our drinkers.”

They also explained via social media that, “This expansion project is coupled with further beautification of our 500 block of Willow Street with plans for additional retail and creative social space.”

Congratulations on the growth and for your community support over the last year plus.

According to the the brewery, “Batch 2 is a fresh iteration of a rustic saison style with crisp pilsner cracker and soft wheat edges. The yeast lends a characteristic white pepper with soft clove and stone fruit notes lingering on the palate

Here is your handy link spot to read what I covered in Brew & You in September….

With the California Craft Brewers using Long Beach for their annual Summit, we will be getting an influx of breweries in town. Here is the 1st post of many events that will be outside the meeting… (this one at Long Beach Beer Lab) 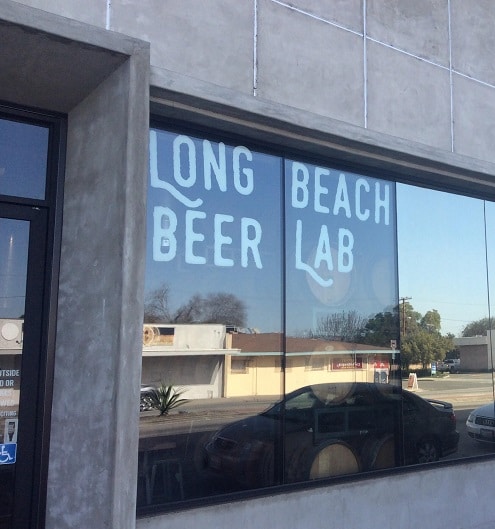 Gotta love the 710 Freeway on a Sunday. It was an easy glide down to Willow Street for a first visit to the Long Beach Beer Lab.

And it is a lovely set-up. Big, airy warehouse ceilings. Barrels at the window on the right as you walk in, fermenters on the left. And food, the LBBL also makes bread and pizza. You can even buy a loaf to go!

There is a pretty Van Gogh-ish star painting heading up the stairs to the balcony seating where you can view the downstairs and its long rusted look reverse L bar and rustic rustic tables.

All of the beers looked lovely. Fluffy heads to them. And the bartenders were more attentive and helpful even coming out from behind the bar to talk. The set-up reminded me of a lit version of what Phantom Carriage has done in Carson. 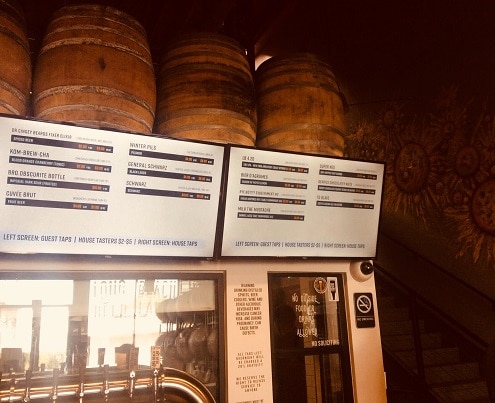 Here are some back of the envelope reviews of the six beers that I sampled….

To Blave
Very similar to Naughty Sauce except a touch thinner. Nice soft pillowy texture to it. 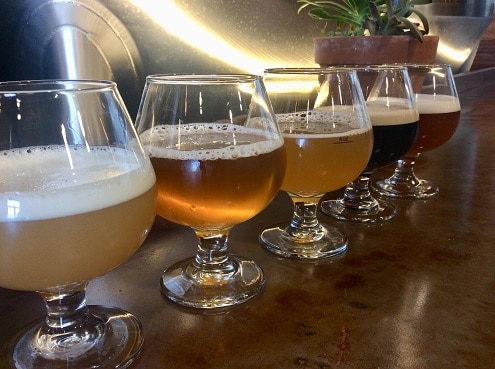 LB 4.20
NE IPA bright pineapple. Again soft and feathery. Quite bitter though at the back. 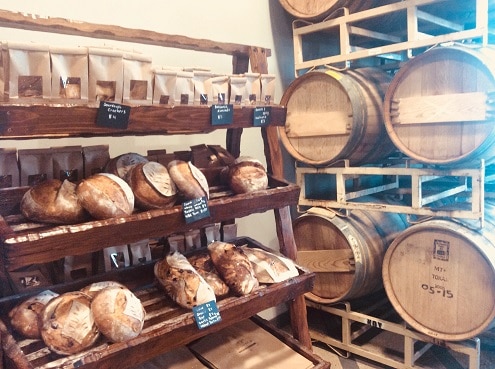 Overall, I was quite impressed by the beers. They all had a touch of thinness to them which might be a house style and a point of differentiation from other breweries that are all about big.

With Ten Mile just down the road on Willow and with Steelcraft and Smog City just up Atlantic. This is a neat little beer hop.