Smog City came through with the IPA series in 2021. And for 2022 they are going big as in embiggen the ABV.

“Aptly dubbed the Bizarre Evolution Series, this series will embody our collective spirit of forging ahead, innovating new and exciting beers, and making the best out of this new reality.

The first beer in this exciting new series will be released on Friday, January 21st and we’re coming out strong with a Triple IPA that is 11%.”

When I saw that the classic Black Tuesday was going to be put in 16oz cans, I was happy. I will be even happier when they come in adorable little 10oz bottles.

So, I typed that intro before I received a mega bounty of Black Tuesday 2020 which included cute little 10 ounce cans of three different variants!

You’ve got your maple, vanilla and Port barrel-aged versions but those will wait until November. Can’t rush a beer that hasn’t been rushed.

First, let’s talk the original. Almost drank it straight out the can like a libertine. It is boozy. But not as hot with alcohol as I feared. There is a burn. At 19+%, there is going to be one. But this drinks smooth and might well smooth more with extra aging. I get raisin and fig and big bourbon notes swirling. I can totally see why other flavors would appeal as additions to this.

It may be passé to say that we as beer fans need to hew close to our roots but there are relatively few beers that I believe need to be tasted each year. Black Tuesday is one of those beers.

Back in the day, there were some weird gimmicks / marketing / boundary pushing beers. And one of the weirder chapters in the craft beer history book was the high ABV battle between BrewDog and Shorschbrau. Scotland V Germany to create a beer higher in alcohol than some spirits.

There was Tactical Nuclear Penguin at 32%. Then the Germans countered with their Bock at 40%, BrewDog came back with Sink the Bismarck which tipped in at 41%. The Bock returned at 43% before The End of History arrived at an eye popping 55%.

All that is preamble to the fact that the two breweries have joined forces (via Zoom) to create a new beer. More news on what it will be is coming.

Next in our local, cellared and high ABV beers for review is The Nothing from Smog City of Torrance. 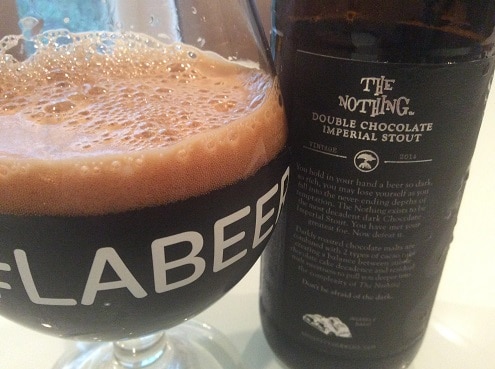 Another beer from the year 2014 and one that I thought I would bring up after the Wood Cellar festival.

The Nothing pours jet black with a toffee head to it. 4 years might be too much for this one. That would be my bad for losing track of it in time and not recognizing that it is under 10% which is the generic threshold for cellaring. Bit of a wine vinous thinness has crept in. Sapping some of the velvet nature that an Imperial would normally possess. The chocolate has a bit of tang and is in second place strength-wise to a coffee roast note.

To add to the degree of difficulty, the featured high ABV beers will also come from my cellar and be local.

First up is White Rabbit, an imperial Wit bier that was the 4th Anniversary beer for Eagle Rock Brewery. Let’s just say that was a “few” years ago. 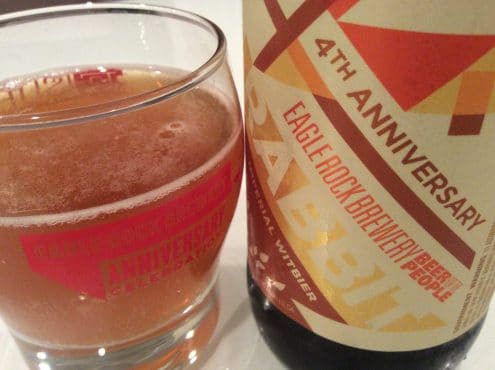 The bottle was helpfully stamped with a born on date in 2014. Wine sour smell on the initial cap open. Considering this is a four year old beer in a style not known for keeping, it is not too bad. Once warmed a skosh, it settles down into a spicy fall beer. Certainly a Wit but it does not taste like 11%. Getting hefeweizen like esters of clove here. A tiny amount of warming as the bottle goes on. Some vinous notes at the very back along with a slight menthol touch.