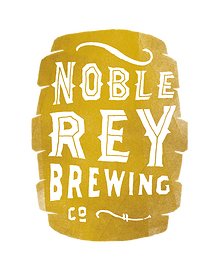 This brewery is also “in the works”.  In fact Noble Rey Brewing just got their boiler a couple weeks ago and keg collars recently arrived as well and they should be fully operational in 2015 if not sooner.

You will be able to taste beers such as “B.A. Baracus (an American brown ale), an amber ale called Steam Punk, and a 7.5 percent ABV German IPA dubbed Lorelei Rock, as well as a seasonal Day of the Dead-inspired brown ale brewed with piloncillo (Mexican brown sugar), cinnamon, and ancho and guajillo chiles.”

They have also toyed with some experimental beers in the form of Party Like it’s 1773 Patriot Ale that is ‘Dry Leafed’ with tea, golden in color and an Imperial IPA that clocks in at “9% ABV, around 100 IBU.”

Currently they are draft only with a canning line being readied for the future.

Right now the best place to find their ales are at the Dallas Beer Kitchen.