Talking about the California drought and the seeming non-stop heat is getting old but it does play into beer festivals because most are held out of doors and it can dampen the fun like sweat on a shirt.

The 2015 version of the LA Craft Beer Crawl had the blazing sun to contend with more than most because it’s strongest and best attribute (other than the beer, of course) is the walking the streets of Downtown LA.  Seeing new condos and new business but also seeing the old side of the city from street level and not just the 110 freeway. 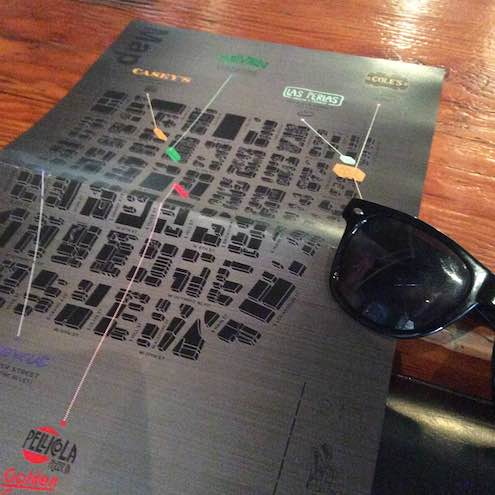 The check-in process this year was notably smoother (and on time) and in a new spot near Cole’s and Las Perlas.  From there me and beer buddy Rich headed to the Golden Gopher to have Return of Sassy and then Even Sassier.  Starting the day off with a rye bang.  Then through the heat to Seven Grand to partake of two new Highland Park beers, Hammered Satin an Oatmeal Stout and then Dank You Very Much which was my pick for beer of the day.  A lovely IPA that I could have had all day long. 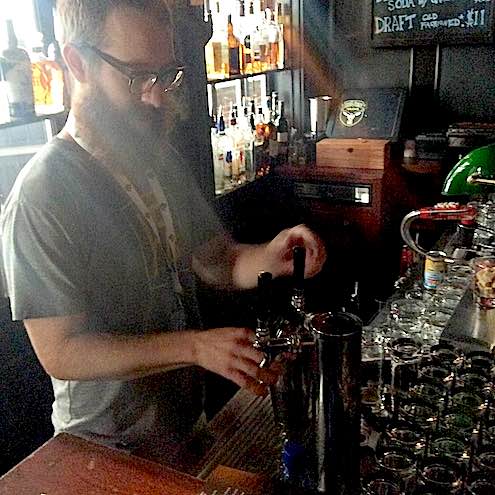 From there we snuck into The Varnish with our press passes to try another HPB beer, Uncultured.  A wine barrel aged bottle offering that then faded into having Mattina Rossa from Allagash.  In between we chatted with Bob from HPB, Omar from Three Weavers, Jon Carpenter from Angel City and David Munro from Bell’s.

Our stamina fading we went back across 6th Street to Casey’s and grabbed a Phantom Carriage saison before calling it a day. 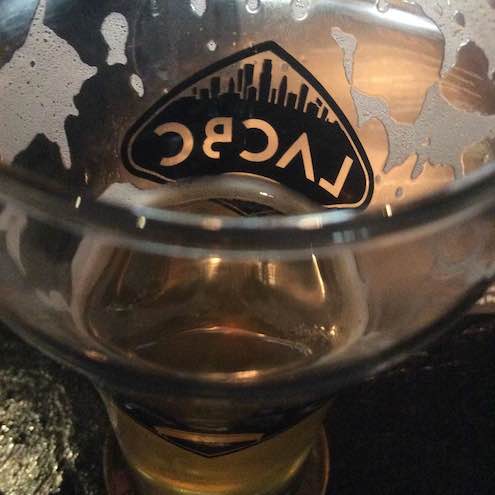 As usual, this is one of the better fests for beers.  A wide swath of breweries are involved.  Locals and non-locals are welcomed.  It is a great activity for newbies to beer because you have choices that aren’t whale driven.  Yes, there are rarities but anyone can get get a taste of a special beer like Golden Brett from Allagash next to a lager from Ninkasi.

As I mentioned, I loved the aspect of walking because it cuts down on the bro’ness that other festivals have to deal with.  The annoying aspects are contained in just one space.  This year the signage at each entrance was great.  But inside each space, especially Casey’s, finding the brewery you wanted was made more difficult because the signs inside were in matte black with dark grey writing and even the most eagle eyed could barely make out the words.  (My press pass was inches from my face before I could read the word “Press”) This was in stark contrast to the blinding yellow volunteer shirts that were in abundance.  It would also have been better to have the check-in not so near to two of the stops.  It made those two hard to get into and out of.  I liked that no beer was being served at the check-in but it would be great to have it in a central spot in the city to subtly force people to scatter in all directions.

Those are little tweaks to make an already great LA institution better.  Kudos to Christina / Hallie and the 213 group for another job well done. 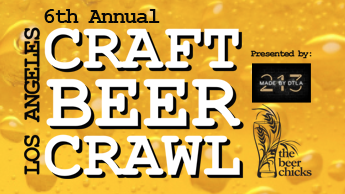 It is time to plan your beer time around the 6th annual LA Craft Beer Crawl which will take place (where?) in downtown LA on Saturday, August 29th.

This is a heckuva event.  One of the better on the LA Beer Calendar and it is because of the fact that “Attendees will have over 100 craft beers to sample across 7 unique downtown LA bars & restaurants, all within walking distance.  The event is a collaboration between 213 and The Beer Chicks, Hallie Beaune and Christina Perozzi.  As always, the beer selection will be curated by The Beer Chicks and will feature the top craft and artisanal brewers in the country!”

And a helpful hint, the VIP tickets are well worth it. 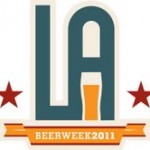 As if last night wasn’t enough, back on the road to Whittier and The Bottle Room for Deschutes beer and chocolate…. 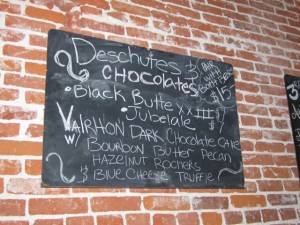 Who needs dinner when you can start with dessert. Well, I almost did that last night. Placed an order for the chocolate dessert sampler and the two Deschutes beers (Black Butte and Jubelale) after sitting down. Then realized I should probably have some food first. And since I wanted to save the beer to pair with the desserts, I sampled Strand Brewing’s 2nd Anniversary braggot. 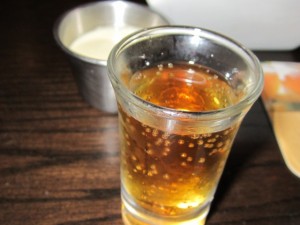 It was quite good. Braggots are hit or miss for me but this had a nice interplay of honey, vanilla and spice. A great fall beer for cool nights. (LA should get one of those in November).
Then it was on to the dessert. 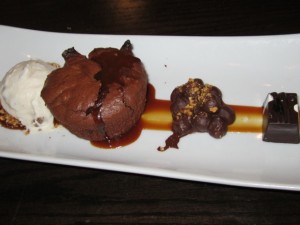 . The cake was soooo rich. That was a wicked mixture of caramel and chocolate that came oozing out of the middle. I am much more a pie guy, but molten cakes rank really high too. The chocolates were also great. There was blue cheese lurking in the small square and it was good. Again, I shall close with the beer. 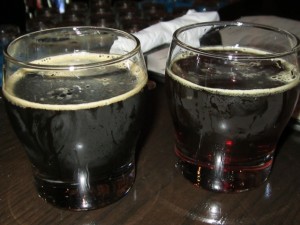 I had the Jubelale 2011 at the Beer Bloggers conference this year and this was a chance to see if my initial reaction would be changed. It hasn’t. But it doesn’t scream winter ale to me. The Black Butte was quite good and matched the richness of the desserts better..

As usual, I was wowed again by the food of Tony Alcazar and the great tap list. 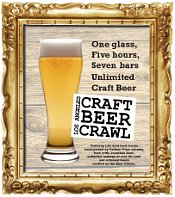 Here is all the information you need for the crawl that is in one month:

Taste as many samples of over 50 delicious craft beers across 7 different unique venues all within easy walking distance of each other (7 Grand, Golden Gopher, Las Perlas, Cana Rum Bar, Cole’s French Dip, Broadway Bar & Casey’s Irish Pub) We Beer Chicks are curating the beer and are collaborating on this event with Cedd Moses & 213 Ventures that will feature some of the top Craft and Artisanal Brewers in the country!

We are also proud to have the host of KCRW’s Good Food, renowned author and executive chef/owner of one of LA’s favorite restaurants, Angeli Caffe, Evan Kleiman involved with the Crawl this year. She’ll be curating a selection of delicious food trucks to indulge in along the crawl route.

A portion of the proceeds will go to Heal the Bay. an organization dedicated to making Southern California waters healthy, safe, and clean.

TICKETS ARE ONLY AVAILABLE ONLINE and cost $49.00. A bargain for what it includes: a 6oz tasting glass and wristband gaining access to all the venues featured in the festival, unlimited tastings of over 50 different taps in 7 different locations from 3pm-8pm. Hurry up, because tickets are going fast!”

I missed the first iteration of this event so I can’t give a thumbs up or any helpful hints. Except for making sure you use Metro. OK, another suggestion look for Noble Aleworks and Uncommon Brewers. Last thing, it is good to see resident L.A. food host Evan Kleiman involved. The craft beer scene could use her voice advocating for more breweries and better beer lists at restaurants.

One week from today, you can partake of beer (curated by the Beer Chicks) and food (curated by famed food writer Jonathan Gold)

Beer wise, Deschutes, Unibroue and Eagle Rock are on board with apparently more to come. And even the premier food show here in LA has talked about it on today’s show, so check out Good Food for more information.

Go HERE to check out the crawl info and purchase tickets

Here is a heads up. One week from today, the great Library Alehouse is pairing with the Beer Chicks for a beer dinner pairing that benefits What a Pair. 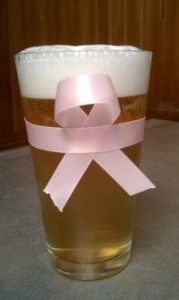 Here is the 411 and the menu:
“Christina Perozzi and Hallie Beaune, better known as the Beer Chicks, are the co-authors of The Naked Pint an Unadulterated Guide to Craft Beer. They will be on hand to show us their Pair(ings), and guide you through some of beer’s best styles. Come and learn a little about the world’s favorite beverage.

Their will be 9 beers with some small plates for pairings.

LA Cabal has posted the link to purchase tickets to their May 9th event. Follow this… http://www.lacabal.org/ . They have also posted a partial list of breweries attending.

Secondly, Good Food last Saturday Evan Kleiman had Nathalie Balandran on the show to talk about beer and the history of women and brewing. Go to KCRW.Com and download the podcast. Nice interview with great info (I just wish it was longer).