First off, this is the first canned wild / sour beer from the BarrelWorks brand of Firestone Walker and second this could be an emerging style trend. The sour flagship that tries to win back ground from the overly fruited dessert beers while staying traditional.

You can read more about the three aged beers that were blended into this one beer right HERE.

Put together two sour blenders with great pedigree and you just might come up with something like Big Mood, a combo of BarrelWorks and Sante Adairus. Then French Oak and apricots to go along with the wine grapes.

News from Firestone Walker to pass on. A new Luponic Distortion is out with a Lychee tint to it and BarrelWorks has their first ever blueberry sour beer. The press release states that they are made with Bluecrop blueberries which I read as BlueCorp each time. As the photo shows, it is quite a pretty beer.

Firestone Walker Brewing Co. meets Brouwerij Liefmans , and the result is the new collaboration,West Odnar. WO is a blend of Liefman’s Goudenband (a beer that I need to revisit), a beer aged with Viognier grapes, and a wild IPA. I will probably pick up a bottle (or 2) when in Paso Robles.

In case you missed it on your Facebook feed, this was posted last month…

Almost makes me want to get a barn. I expect to hear about some interesting beers coming from BarrelWorks with this coolship in place. 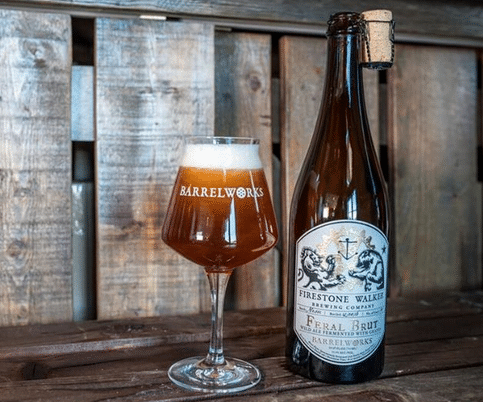 Want to taste pure gold? As in Great American Beer Festival 2018 gold? Well then run to the Venice-ish Propagator to pick up the first-ever 750ml beer from Barrelworks and Firestone Walker. Feral Brut is “a beer & wine hybrid “champagne” made in collaboration with Foxen Winery.”

The beer is part of the Terroir Project of Firestone Walker (as if they need another world-class beer event) and hopefully not the last. 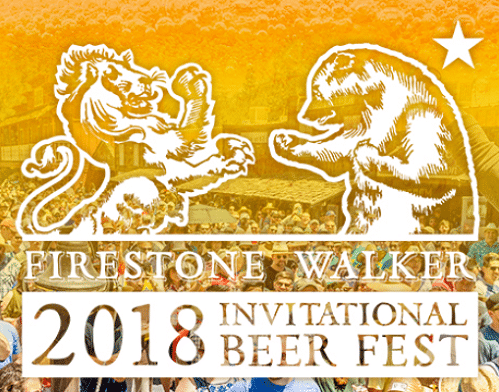 It is dangerously easy to miss out on Firestone Walker beers when you are at the Invitational. They are usually inside what I call the “Fort” near the music stage.

But you best look for it because BarrelWorks has some fruit forward beers that aren’t easily found and should be tasted. They are certainly on my list (if they don’t get bumped for other wild ales)

1. UnderCurrants (from the press release)
“We have been toying around with the idea of a currant-infused beer for several years now,” said Barrelworks’ Master Blender Jim Crooks. “We finally decided to strike when we were able to score beautiful whole black currants from a farmer in Poland, which is renowned as one of the world’s finest currant-growing regions.”

Crooks and his team blended the currants with 150 barrels of Agrestic Ale (Barrelworks’ wild iteration of Firestone Walker’s signature DBA pale ale) that had been aging for 12 to 48 months. The currant-infused Agrestic blend was then inoculated with Barrelworks’ proprietary Brettanomyces yeast and aged for an additional four months in oak foeders.

Lastly, more Agrestic Ale was added back into the blend to achieve an optimal balance of currant flavor and texture. “The intensity of the currant flavors was out of this world,” Crooks said. “By cutting more Agrestic into the final blend, we were able to dial everything into perfect balance.”

“We welcomed the team from The Publican in Chicago, and specifically Beer Director Adam Vavrick, into our lair to add his mark to this truly collaborative creation. Armed with an idea to use citrus in a blend, we by chance landed in the arms of Friend’s Ranches of Ojai, who offered us the beautifully grown Pixie Tangerine. By adding the juice and zest from the tangerines to the Publican’s proprietary barrel blend, we have created a liquid expression of an idea.”

On top of the Firestone Walker Lager news, there are two other big tidbits that you might not have heard of from their Buellton based Barrelworks.

1. Barrelworks has been draft and bottles only but is hoping to roll out cans in 2018.

2. A coolship is being assembled at Firestone co-founder David Walker’s vineyard in the Santa Ynez Valley. Imagine the yeasts and microbes that are in the air in that area!

Kudos to San Luis Obispo.com for the news.

This month we focus on sours from established breweries. Sometimes chasing new leads us to forget the classics. Well, and one new beer but from a classic brewery.

~LIGHT
Firestone Walker Barrelworks/ Bretta Rose5.3% ABV
“Thirty miles north of Barrelworks lies the fertile Santa Maria Valley. Its warm days and cool marine layer-fed evenings allow for a cornucopia of fruits and vegetables to be grown in its rich soil. One of Santa Maria’s crown jewels is locally grown raspberries. We jumped at the opportunity to ferment fresh local raspberries with one of our Barrelworks creations. Behold Bretta Rosé! A low-alcohol Berliner Weisse style ale, acidified and matured in French oak puncheons for 6 months, is the foundation for this gem. Add 1000 lbs. of fresh raspberries, allow a secondary wild fermentation for 4 more months and voila (!), we have a crisp effervescent concoction, bursting with raspberry perfume and flavor, a rosé color, bracing acidity, and a clean and refreshing finish.”

~MEDIUM
Ommegang/ Pale Sour6.9% ABV
“Pale Sour is an elegant, drinkable sour beer, unique in that it’s not wood-aged. It has a well-balanced blend of sweet and sour. Liefmans is such a historic, iconic brewery and having the opportunity to work with them has been an honor and very enjoyable. Pale Sour begins with a mixed culture fermentation in open copper vats. Aged over several months in stainless tanks, master blenders blend new batches with older ones until the optimal balance of flavors is reached.”

~DARK
New Belgium/ La Folie7.0% ABV
“La Folie, French for “the folly,” is a beer steeped in New Belgium brewing tradition. This wood-aged, sour brown spends one to three years in big, oak barrels, known as foeders. And when the beer finally hits the glass, La Folie is sharp and sour, full of green apple, cherry, and plum-skin notes. Pouring a deep mahogany, the mouthfeel will get you puckering while the smooth finish will get you smiling. Not a beer for the timid, La Folie is a sour delight that will turn your tongue on its head. Find out why it’s considered one of the best sour beers around. “ 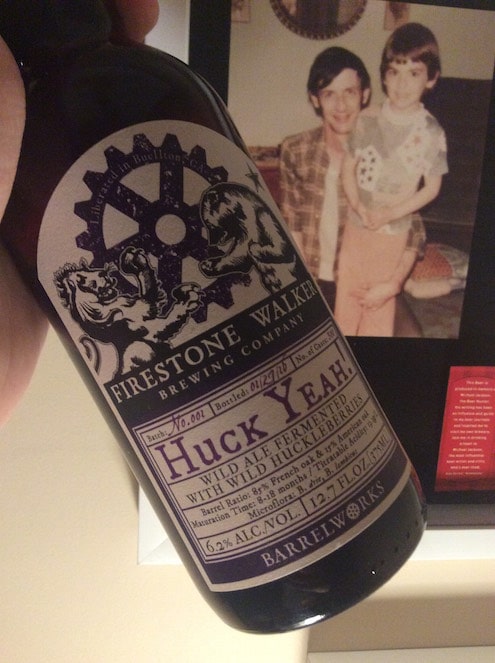 We start sour March off with the huckleberry infused sour from Buellton’s (and Firestone Walker’s) Barrelworks division.
Huck Yeah! pours a vivid red color. Tart & fruity and buttery aroma. Same notes in the flavor as I take my first sips. Not super sour. Just a bit tart. My dad would have liked the name. Bit bubbly which I think adds to the beer. Huckleberry comes through. Almost like eating a handful of berries. A slight wine barrel note at the end.