I cover quite a few milestones on this blog. Most are under 10 years but today, I want to bring your attention to New Belgium who is at a much bigger number, 30. They are honoring their flagship Amber as well as modern trends with an Amber IPA.

Karl Strauss Brewing began a month long anniversary a couple days ago for their 30th year in the beer business and there are two beers to look for plus some throwbacks (if you can make the trip south from L.A.…. 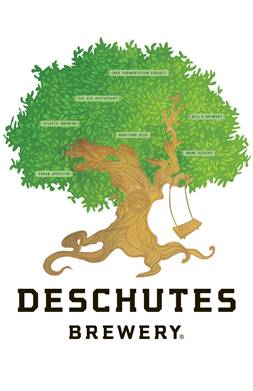 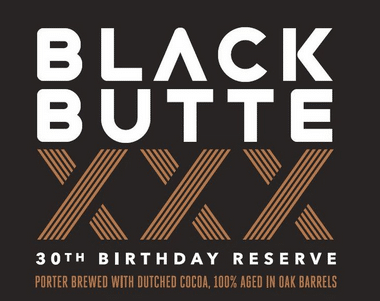 In addition to reviewing a pair of San Diego beers that were new to me, I have two Bell’s beers to review. And this one is special… 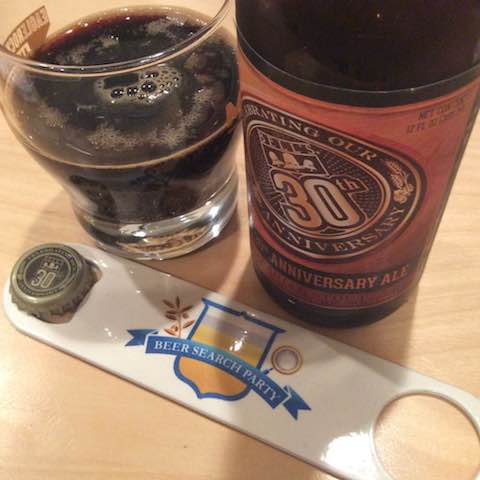 This one pours really thick. Almost an oil like sheen to it after the dark brown head fades down to nothing.  The aroma is chocolate covered black licorice.  There is a bit of heat to this at that back that lingers but it can barely contain the anise notes. If you liked the Italian licorice notes in Expedition Stout then this one doubles up on that fun. There is also a touch of coffee ground bitterness snuck into the mix as well as a boozy rum barrel sweetness.   This anniversary ale comes in a 12oz bottle which makes for sharing because this falls into the category of sampler size is best.  Get two friends and share one bottle.

First off, thanks to mi madre for hitting up multiple stores in the Portland area to find me not one, but two Widmer beers from the 30th anniversary beer series. 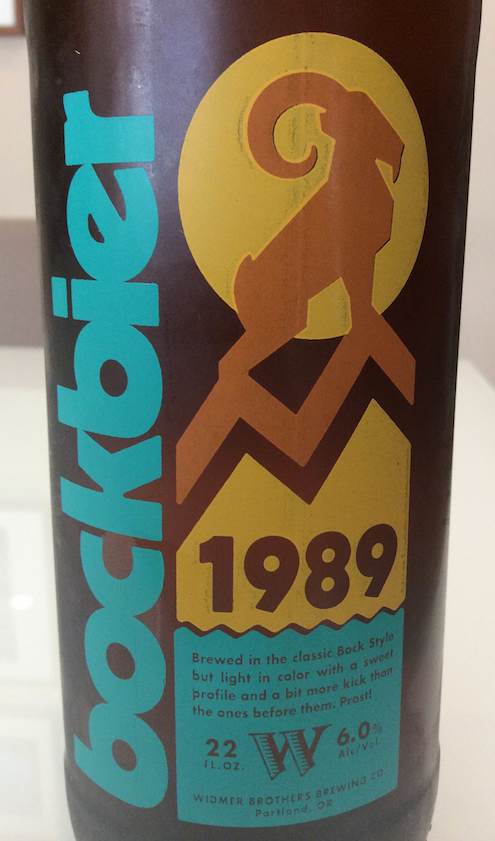 The Bockbier pours a light orange color. There is some nice lacing on the glass as well. But from a non aroma distance, you could mistake this beer for many un-bockish styles.

Honey is first to the nose. Followed by a bit of vanilla. The taste adds a bit of medicinal qualities and some bitterness. The finish has a bit of dryness to it but is more subtle than pronounced. There is a bit of hop character here as well but I don’t think there is enough to push it out of the style boundaries.

This beer was a very limited release and is probably only found in Portland or a beer hoarders cellar. If you want to try a bock to acquaint or re-acquaint yourself with the style, La Trappe makes a bock that is highly rated and would make a good start. 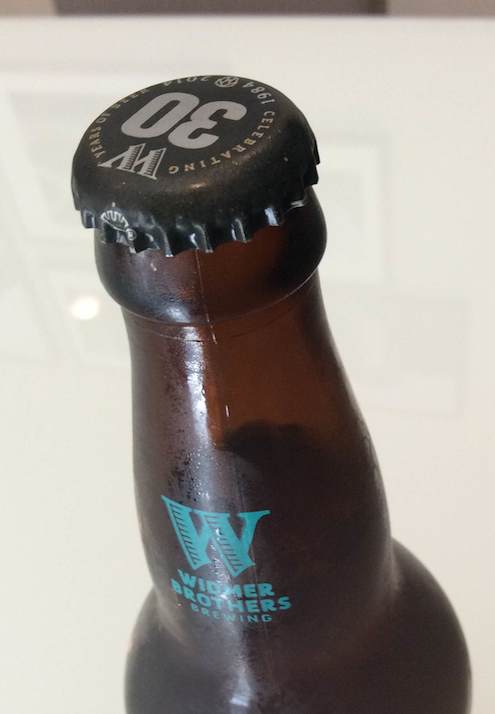 And like any brewery worth it’s salt, it will be creating a series of beers all through 2014.  “Headlining the brewery’s 30th Anniversary celebration is the 30 Beers for 30 Years Series. Beginning in April, the month Widmer Brothers was founded in 1984, the brewery will brew and release 30 small batch beers, each brewed to commemorate a specific year and beer in the brewery’s 30-year history. The 30 beers will be brewed at the brewery’s 10-barrel pilot brewery at the Rose Quarter in Portland and distributed locally, both on draught and in 22-ounce bottles.”

Plus # 1 – “Widmer Brothers is tapping some of Portland’s best creative talent for the 30 Beers for 30 Years label designs. Thirty different local artists and designers will design label art for the beers in this series based on their interpretations of the beer, making for a unique look at the past 30 years of Widmer Brothers Brewing.” 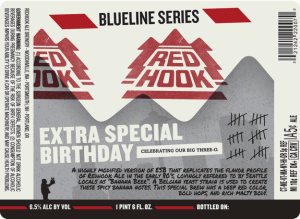 Redhook has been changing labels and bottles but the outside doesn’t matter as much as the inside. And I am glad to see the ESB added to the new Blueline Series. Of course the “B” in this case stands for Birthday, as in 30th.

Here is the info… “a highly modified version of ESB that replicates the flavor profile of Redhook ale in the early 80s, lovingly referred to by Seattle locals as “banana beer.” A Belgian yeast is used to create these spicy banana notes. This special brew has a deep red color, bold hops, and rich malty body.”. “On November 15, 1980 the first batch of Sierra Nevada beer made it through the brewhouse, helping to usher-in a new era of interesting, hand-crafted, and flavorful beer enjoyed around the world today.
Come and celebrate this American craft beer renaissance at the Sierra Nevada 30th Anniversary Party in our very own estate-hops field.
The party kicks off at 4 pm with sampling of 30 beers including some of your favorites from the last 30 years, plus a few unique finds from the cellar. Many of these beers never have been, and never will be, released to the public – this may be your only chance to sample them! They are available in limited quantities, so arrive early to ensure that you get to taste the ones you are most looking forward to. We will be posting the full beer list in the coming weeks.
The evening will also feature the musical stylings of Roy Rogers & The Delta Rhythm Kings featuring two very special guests! The Joe Craven Trio will kick off the evening’s festivities, followed by Houston Jones.
The Sierra Nevada Taproom is catering dinner from 5-8 pm, which costs $15. You can purchase dinner tickets onsite at the event.”
MENU
Fresh Baked Breads – Straight From the Sierra Nevada Ovens
Sierra Nevada Salad – Mixed Organic Greens Tossed In Balsamic Dressing with Cherry Tomatoes, Crumbled Gorgonzola and Candied Chico Pecans
Fall Vegetables -Tossed In an Estate Garden Herb Butter
Garlic Mashed Potatoes – With Sweet Creamery Butter and Roasted Garlic
Estate Herb Rubbed Tri Tip – Pale Ale Bbq Sauce
Sweet Pepper Polenta – With Roasted Estate Tomatoes And Peppers, Onions Carrots And Chives 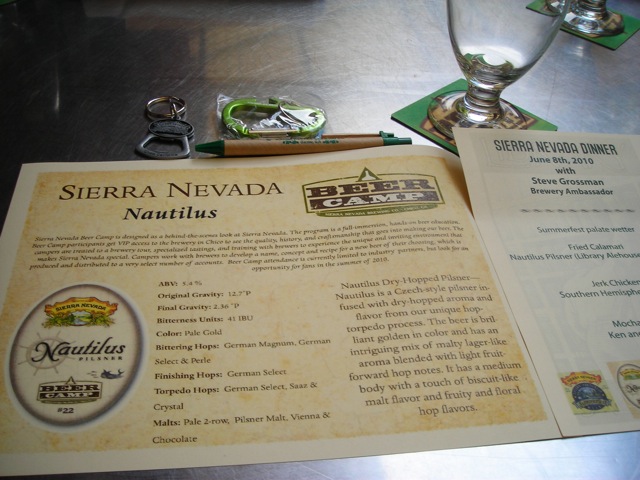 As usual, when you go to a Library Alehouse event, you get great beer and great food. You can tell some thought has gone into the preparations.

This post will talk about the beer and the food and tomorrow I will post a video and some interesting notes from Sierra Nevada Ambassador Steve Grossman. (That last name should sound familiar to SN fans.)

We started with a palate opener that was great for our new found Southern California sunny weather, Summerfest. 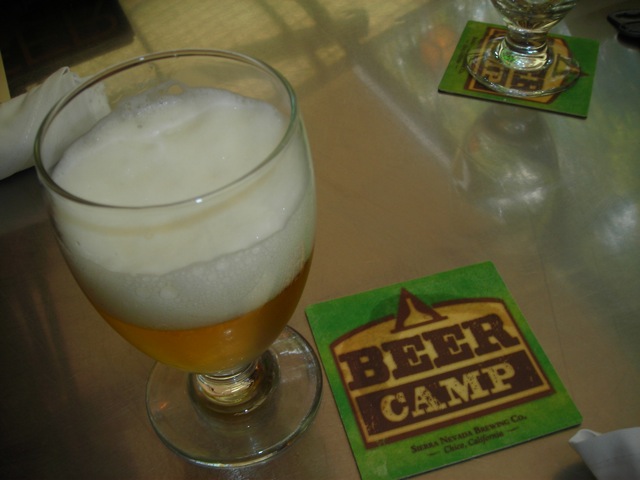 It was probably my favorite for the night (tied with the Nautilus). It was a straw yellow and pretty zippy. A little bit of tart lemon to it as well as some nice hops.

Even though it was not included in the menu, I had to try the latest in the 30th Anniversary collaborative beers. This being the Imperial Helles Bock. The Charlie Papazian and Fred Eckhardt inspired offering. 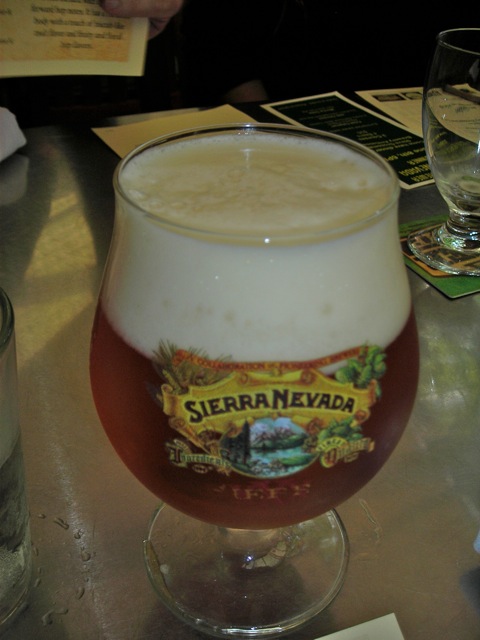 This beer left me a bit confused. Complex. Lots of alcohol but not heavy. Malty flavors that faded into a touch of hoppiness. It was an interesting take on a bock for sure. Poor me, I will have to try again (maybe from a bottle) to see if I can catch anything new.

Then it was on to the Beer Camp Nautilus. 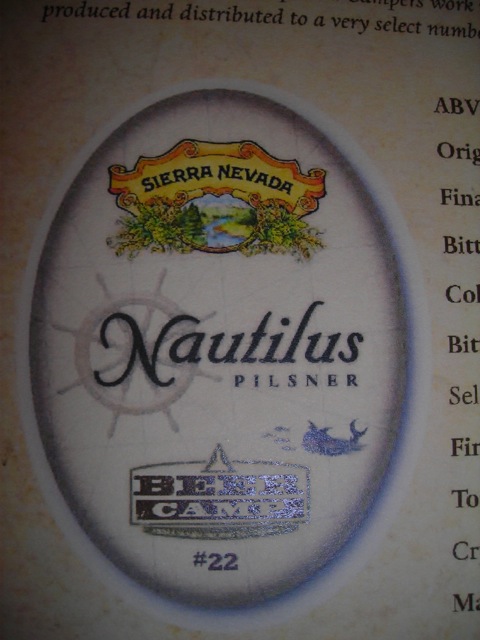 This was another really punchy, wake you up type of beer. Very easy to drink. I could see this as a gateway beer for people raised on pilsners. It has all the attributes of a pils with extra hops and extra grain flavors. 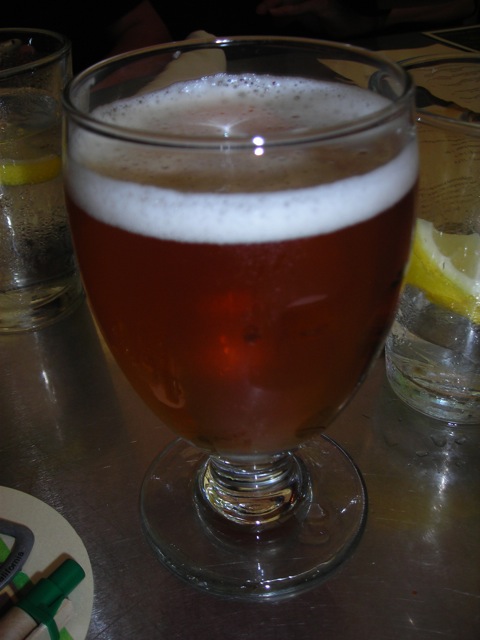 Last was the first 30th Anniversary beer, the Anchor Steam collaboration. I don’t know what happened since my last taste of this beer but it was wicked smokey. I don’t know if that is how it ages but the chocolate notes I first encountered were smothered away. I was really looking forward to it and it was the biggest let down.

On the food front, I ate fried calamari! Not the spidery bits. Just the suckers. Not horrible. Sorta like mussels except less chewy. The Jerk chicken was really spicy. The beans and rice duo on the side really helped put the fire out. The most successful dish to me was the Mocha Torte. Delicious! All paired well with their respective beers. 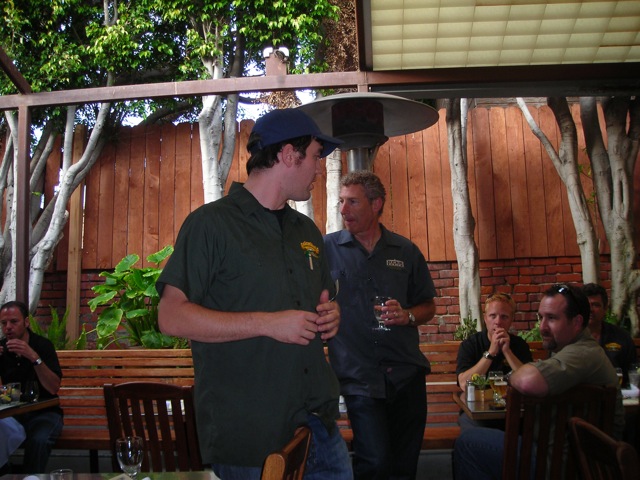 Sierra Nevada has really been putting out new stuff left and right. Kellerbier, Life and Limb, Glissade and now the new 30th Anniversary series is under way. 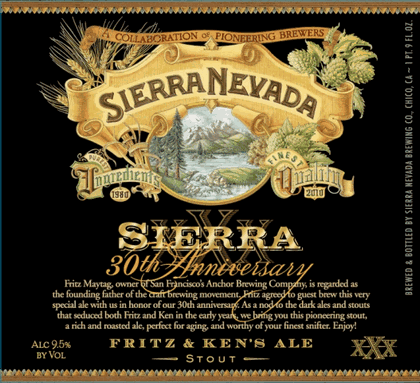 The label reads, “Fritz Maytag, owner of San Francisco’s Anchor Brewing Company, is regarded as the founding father of the craft brewing movement. Frtiz agreed to guest brew this very special ale with us in honor of our 30th anniversary. As a nod to the dark ales and stouts that seduced both Fritz and Ken in the early years, we bring you this pioneering stout, a rich and roasted ale, perfect for aging, and worthy of your finest snifter.”
Future collaborators may include Jack McAuliffe of New Albion fame, Fred Eckhardt (who already has a Hair of the Dog beer with his name) and Charlie Papazian, the noted homebrewer.

Check the Sierra Nevada website HERE for more up to date information.