I would expect nothing less in label art than this from the combo of Pizza Port and 3 Floyds…. 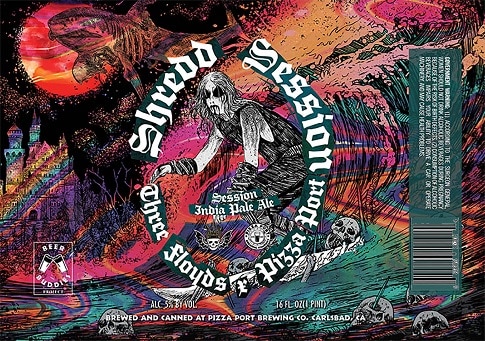 Very trippy and skull driven. All for a session IPA. You won’t be able to miss it on shelves for sure. 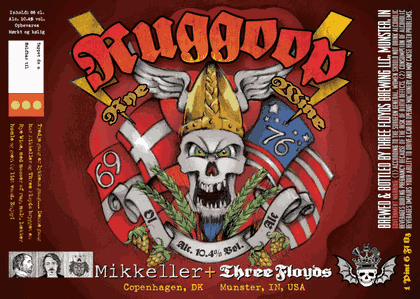 While Mikkeller the nomad brewer was in Chicago for the Craft Brewers Conference, he apparently made another side trip to Munster, Indiana to make another collaboration brew with Three Floyds. The unpronounceable Ruggoop is a 10% ABV “Rye Wine.”

These two eccentric and much loved and followed breweries have been down this road before. Weird names, weirder labels and even weirder styles. Hvedegoop – a hoppy wheatwine was the first collaboration. Second came Oatgoop. That beer was a wheatwine brewed with oats.

Maybe next up will be a brett wine.

While the beer geeks were slobbering over the news of a 1K IBU beer coming in February, I was more interested in two other notes…

# 1
“2009 was also the year where Mikkeller got his line of Single Hop on the move. After the first single hop, Simcoe, more followed, and last month came Tomahawk and Amarillo which was the 6th. and 7th. Early next year, 2010, an additional three new single hop beers will hit the market and at the same time new batches of the previous 7. This way you will be able to visit your local beer-pusher and buy 10 different Single Hops at the same time. With 10 different Single Hops in the fridge, all you need is a bag of peanuts to save the evening.”
I love the Mikkeller Single Hops and the fact that more are coming is beyond awesome.

# 2
“Mikkeller has planed more travels abroad in 2010. One of these travels will go to Greece to brew a beer with the greek micro-brewery Craft. And a couple of journeys to the US can not be excluded. Whether this will result in yet a new beer brewed with Three Floyds, or Mikkeller will brew with a different brewery is to early to say. Another cooperation with a European brewery is in the plan for 2010 also.”

3 Floyds + Mikkeller. That will be a beer to hoard for sure.

Today is my 10th Wedding Anniversary!! In honor of that momentous occasion, here is a list of 10 beers and breweries to mark each passing milestone.