Bear Republic Brewing has started sending out cans of their iconic Racer 5 IPA. I certainly hope that this emergence will mean that customers will pick it up because they see a can that says IPA and discover or re-discover this gem of a hoppy beer. Secondly, I hope it means that Bear Republic will start canning their other beers as well as well as one-off’s and seasonals.

Just when I think that Brouwerij West has made too difficult a label, well, they go and top themselves. This time mauve, pink and blue clouds grace their latest IPA, Hitchhiking Ghosts. Oh and I bet the liquid inside it just as artistic.

The latest Golden Road beer to make it to the cans is Get Up Offa That Brown. They come in the the new-ish four packs with a window to see the really cool Sunset Strip can design. 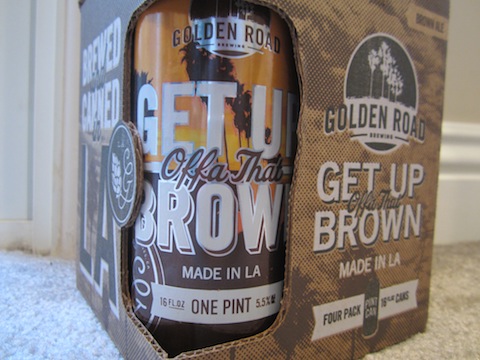 The crew at Golden Road describe it as a “…traditional English-style Brown, complete with chocolate-y malt notes and a smoky-sweet aroma has been a draft-only favorite since its introduction in early 2012.”

It does indeed pour a cola brown with a bit of a fizzy stream of bubbles. Right out of the ‘fridge the taste is muted but once it gets to room temperature the malt notes start adding up giving you a flavor profile that leans towards toast but touches on a sweetness and a skosh of chocolate before the carbonation takes it away so that you can enjoy the next sip. Like it Hefeweizen and Point the Way counterparts this is very light and quite sessionable. 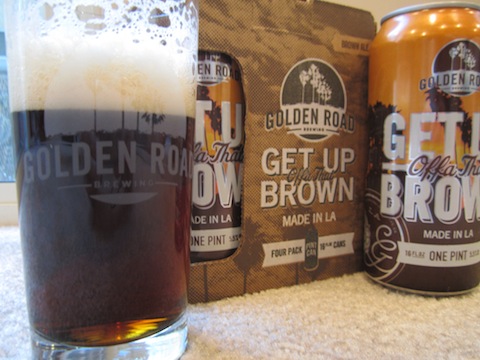 Maybe next, Golden Road will release a variety pack with one of each of their canned creations. 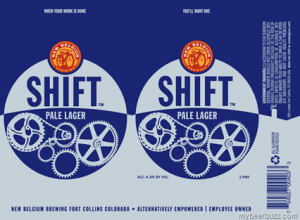 OK. Time to “Shift” away from big holiday ales and look into what we will be drinking next summer.

Maybe a pale lager form 16oz cans from New Belgium? Heck, in LA, I can probably drink it year round.