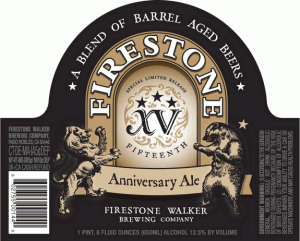 I am one of the lucky who have had a taste of the XV from Firestone-Walker and I am really jazzed about it being released. Due to limited cellar space, I generally buy only one bottle to store. (I have XIV and Parabola) But I liked this one so much, I might get more and I highly recommend getting it. And this coming from a guy who occasionally mocks the Big/Imperial/Double craze.

But here is the rest of the story from Firestone-Walker, “The result of one of the most unique and intriguing beer projects in the world will be released the beginning of November. “XV”, Firestone Walker’s 15th Anniversary Ale, celebrates the founding of the brewery as well as pushing the boundaries of what beer can be.

The anticipation and reputation of XV precedes this beer. XV is the culmination of intense blending sessions by local Paso Robles area winemakers to create a complex yet balanced ale. Eight beers were artfully blended together to create this masterpiece.

“I really like what the winemakers bring to the process, they usually go for blends and flavor profiles that brewers never think of,” said Firestone Walker’s Brewmaster Matt Brynildson. “That’s why I like bringing them in, it pushes the boundaries of our taste and that’s exciting.”

Past year’s anniversary ales from Firestone have changed the perception of beer. These higher alcohol complex blends are more akin to wine than beer. Like wine, the anniversary beers are vintage releases that can be laid down and aged for years with the flavor profile slowly changing. The secondary market for these beers is similar to wine, with bottles that originally sold for around $20 now fetching upwards of $100 each.

“Who’d have thought a bottle of beer would be valued at $100 plus. It is an affirmation that there is real passion for beer out there,” said David Walker, Co-Owner of Firestone Walker.

Firestone XV will go on sale for the first time on Saturday, November 5 at the Firestone Walker Brewery in Paso Robles. Patrons who purchase 3 bottles or more of this amazing beer will gain access to the brewery’s anniversary party featuring complimentary beer and food tastings, music and more.

“XV” will make its debut across all markets where Firestone beers are sold this fall in limited amounts in 22oz bottles. It will also be made available on draft in select accounts.”