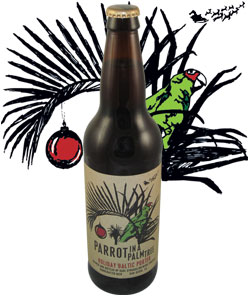 Karl Strauss has taken a page from The Bruery playbook and has embarked on a beach bum version of the 12 Days of Christmas.

Here is their initial offering according to their press release:
“Parrot in a Palm Tree is a big festive beer. Baltic Porters are known for their rich, dark fruit flavors. Loaded with espresso, dark chocolate, and fruit flavors, this northern European style is similar to a less roasty version of a Russian Imperial Stout. To bring out the raisin and plum flavors in the beer, a portion was aged in tawny port wine barrels from neighbors down the street at San Pasqual Winery. “In the last few years we’ve seen a trend toward barrel aging and we thought rather than putting this beer into bourbon barrels, it would pair better with a sweet, fruity tawny port. We called our friends at San Pasqual Winery and the rest is history,” says Paul Segura, Brewmaster for Karl Strauss. After several months in the barrels, the aged beer was blended with a fresh batch creating a subtle oak and port-like finish.

Weighing in at 8.5%, this beer is a great after dinner sipper, pairing equally well with chocolate and fruit desserts. Karl Strauss Executive Chef, Gunther Emathinger, created a special beer-shake to celebrate the release–blending the Baltic Porter and vanilla bean ice-cream for a festive holiday treat. If you have the willpower and patience, this beer will get better with age and can be enjoyed for several years to come.

Parrot in a Palm Tree is the first release in the company’s “Twelve Days of Christmas San Diego Style” series, naming each installment with a wink to life along the coast. The first in a series of twelve, Parrot in a Palm Tree plays off of the 12 Days Of Christmas, with a distinctively San Diego twist. “Living in San Diego we don’t have partridges, but we do have squawking parrots. We thought this would be a fun nod to the locals,” says Paul. Look for the second installment of the series next holiday season”