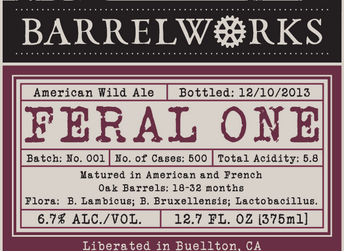 The first beer out of the gate (as it were) of Barrelworks in Buellton will be The Feral One on March 8th.

According to the press release, “The Feral One is a blend of Sour Opal, SLOAmbic, Agrestic and Lil’ Mikkel, all aged for an extended period in American and French oak barrels. Only 500 cases of 375ml bottles were produced.”

You will only get it at Barrelworks or in Paso Robles starting the 9th.  And it will probably cost a pretty penny.  But it will be good and one of those whales that people will proudly name drop in beer circles.