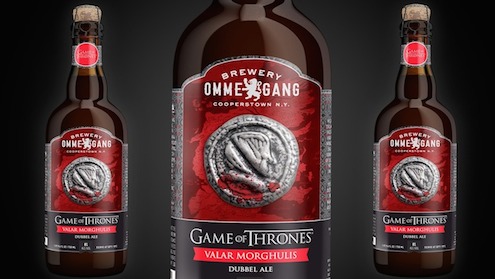 The 4th beer in the collaboration between HBO’s Game of Thrones and Ommegang goes by the fan voted name Valar Morghulis Which in the lands of Westeros means “all men must die.” Brewery Ommegang conducted a Facebook poll in late December for the name which also determined the style of the new beer – “an Abbey Dubbel – which is perfectly represented by the “two-headed” coin which will adorn the labels.”

More from the press release, (edited to avoid way too much geekery about House Stark) “Valar Morghulis is brewed with pilsner and other specialty malts and hopped with Apollo and Hallertau Spalt Select hops. The hue is deep amber-brown with a persistent, creamy, off-white head. Aromas include caramel, toffee, ripe fruit, banana and slightly burnt sugar. The taste is well-balanced with rich malty sweetness, caramel and sugar, and just a touch of bitterness to balance. The finish is surprisingly dry and light on the tongue, belying the aroma and initial taste.

“The Dubbel is one of the most recognized beer styles in Belgium and this is a very tasty version of that style,” said Mike McManus, Ommegang Innovation Manager. “Valar Morghulis is a complex beer, much like the stories surrounding the phrase.”

The label art will feature the two-headed coin, given to Arya Stark by Jaqen H’ghar, one of the “Faceless Men of Braavos” – legendary assassins with the ability to change their appearance at will. Each cork will be fire-branded with “Valar Dohaeris,” which is the traditional response phrase to “Valar Morghulis” meaning “all men must serve.”

Valar Morghulis will be available at retail in fall of this year.”