Earlier this month, I reviewed the gold embossed 2010 version of Trader Joe’s Vintage Ale brewed by the Canadian Unibroue and now we move on to the silver embossed 2011 and see how much (if any) differences there are.

To recap, here is what I said about this beer years ago, Aroma is not malty or roasted. Rich smelling. Pours dark brown close to black. Alot of plum type flavor in here. A faint touch of spice. The cheeks warm up but only after a few sips.

Every once in a while, you end up with a cork battle. This time the cork won. Various instruments of torture were used and I finally was able to get 1/2 of the cork out while the remainder floated merrily in the bottle.

After cleaning up the mess I made in the kitchen, I brought the glass to my nose and smelled cola?  Yup, distinct cola notes in the nose and taste as well as the carbonation. Drastically different from the 2010. I also pick up rhubarb in there as well. Rhubarb pie to be precise. This us such a brighter and bubblier drink.  There are some candi sugar flavors in there which adds to the sweet overall profile.

As it warms, the clove and typical Belgian yeast components come out of hiding. 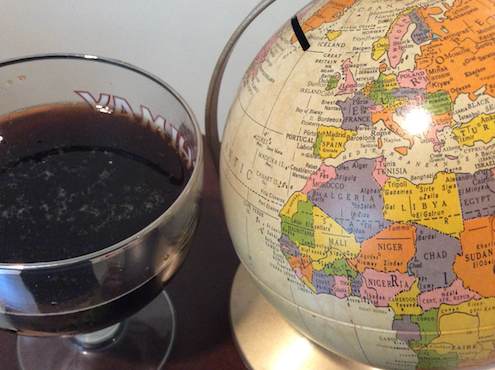 The Verdict?  Strange and soda pop but I kinda liked it. Maybe the thrill of a fizzy aged beer has clouded my judgement but this year was fun.