Thanks to the generosity of Tomm Carroll THE L.A. beer scribe, the Up From the Cellar feature this month is jam packed. We each brought our bottle of Fritz and Ken’s Imperial Stout to see if the same beer aged in different ways would make a difference. Plus Tomm brought a fitting nightcap of an aged bottle….

Now I only have 1 bottle left from the Sierra Nevada 30th Anniversary series.  But it was worth it for this unique cellar experiment. Fritz & Ken’s Ale, an imperial stout, clocks in at 9.2%.  Cellarable but on the lower end of the ABV spectrum to me. 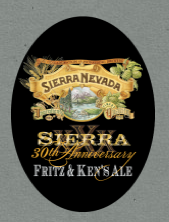 Here is what I had to say when I first sampled it: An imperial stout that doesn’t reek of boubon! It’s about time. Nice stout base with a lot of warming alcohol. Surprisingly not super roasty flavored. Mild with a hint of cherry. pours dark black with espresso head to it.

Tomm and I compared our two bottles. Same beer. Both treated well. And yet the two displayed slightly different characteristics. Mine was a little thinner in mouthfeel with minor notes of chocolate along with a little bit of cherry hidden in it. His had a little more soy sauce taste to it and also more sparkle and a touch of smoke flavor too. Both had a bit of oxidation to them. The alcohol heat that I had when young had mellowed out of it. It was a perfectly passable stout. It would have been interesting to compare our bottles with one that had turned south because I feel this particular beer may have passed prime stage and it would have been good to see what those bad notes were and in what percentage they were present in our beers. 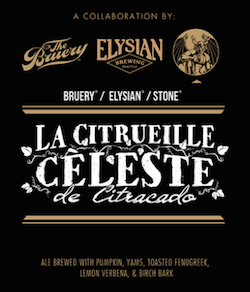 To finish up on a lighter note, Tomm brought out a bottle of Stone La Citrueille Cèleste de Citracado that was brewed with The Bruery and Elysian. A Yam/Pumpkin collaboration.

My review back in 2011 was: Not much in the way of pumpkin or yams but quite nice mix of lemon verbena and birch. Odd at first but this beer really grows on you. Pours light orange.

For a 5% beer that Tomm was worried would be a quick drain pour this was quite nice and still peppy after three years.  There was no evidence of squash at all to my palate but the lemon verbena and spice notes were still going strong.  Maybe that high flavor profile masked other issues but I didn’t get a sense of it being too old.  There was still some bubbles to it as well.  I don’t know how this beer has survived, but it has and it could probably go on longer as well.