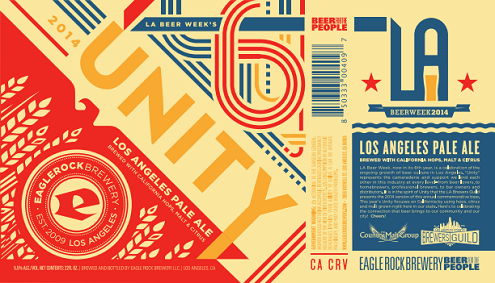 Ever had a beer collaboration? Sure, you have. There are plenty out there. Ever had a beer where all the ingredients were from one state? Longer shot but you might have. But I am sure that you haven’t had a beer brewed with Gargoyle hops. Oh and it’s a sessionable pale ale with local fruit.

And it is the signature beer for L.A. Beer Week the 6th. Of course I am talking about the beer named Unity. The beer was brewed at Eagle Rock Brewery with members of the Los Angeles County Brewers Guild. Country Malt Group also pitched in with a donation of California-Select malt and add in some Centennial hops to pair with the rare, native to California Gargoyle and you have one heck of a way to celebrate all things craft beer in Los Angeles.

UPDATE: I sampled 6 on its release day on the 12th and I really liked it.  Nice and hoppy but it has the characteristic sessionability you come to expect from Eagle Rock.  I detect quite a bit of grapefruit notes throughout but without crossing over into juice territory.  I strongly suggest trying a pint and getting a bottle to toast with later.